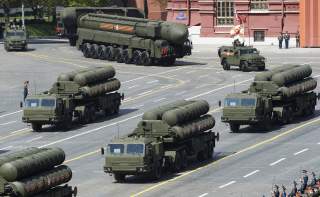 Russia and Turkey have finished negotiating a contract where Moscow would sell Ankara its advanced S-400 air and missile defense system.

Rosoboronexport general director Alexander Mikheev announced concluding the deal on Aug. 22 according the Russian language daily Izvestia. According to Russian media reports, the deal has been signed but has not entered into force yet. Mikheev cites “technical nuances” that have yet to be resolved by the Russian and Turkish sides.

“Although initially surprising to many military experts and observers, this deal nonetheless proceeded essentially without any significant setbacks or much fanfare,” Samuel Bendett, a researcher specializing in the Russian military at the Center for Naval Analyses, told The National Interest.

“In this contract, the devil still dwells in the details—as indicated Rosoboronexport's director Mikheeev's statement about ‘technical nuances’ that still have to be ironed out. Should the deal finally conclude with the physical transfer of S-400s, Turkey would score a major victory in its drive towards rapid modernization of its military forces.”

Bendett cautioned, however, that despite what the Russians are saying, a final deal might be some ways off.

“There is still a good chance that the sale may not come through - the ‘technical nuances’ that were cited by the Rosoboronexport CEO today maybe a code word for continued long-term negotiations that can take a while,” Bendett said.

While the addition of the S-400 would massively boost Turkish air defense capabilities, the political significance of the deal might be larger than the military one. In many ways, this S-400 deal is another indication that Ankara is moving away from NATO and the United States and charting its own course.

“Military capabilities and requirements aside, this prospective deal is Turkey making some very fundamental alignment choices,” Olya Oliker, senior adviser and director of the Russia and Eurasia Program at the Center for Strategic and International Studies, told The National Interest.

“Sometimes an air defense system is just an air defense system. This is not one of those times. Turkey’s recent choices in both the domestic and foreign policy contexts are a rejection of the NATO model; the signals are clear and consistent. In the foreign policy space, Turkey’s evolving policies reflect a growing recognition on Ankara’s part that its interests are not well aligned with those of its allies.”

But that does not necessarily mean that Ankara is moving into Moscow’s orbit.

“Which isn’t to say Turkey is aligning with Russia,” Oliker said.

“Rather, Turkey is shifting away from the NATO alliance without formally leaving it, and hedging its bets for the future.  More broadly, I’d argue that Turkey’s actions are a pivotal component of a continuing global adjustment to a less involved and—more recently—less predictable United States.”

Vasily Kashin, a senior fellow at the Center for Comprehensive European and International Studies at Moscow’s Higher School of Economics, agreed that just because Turkey is moving away from the American orbit, it does not mean that Ankara is cozying up to the Kremlin.

“I do not think that we are winning them over,” Kashin said.

“They make it very clear that they want to be another big developing country playing multivector diplomacy and balancing between bigger powers. That has been clear enough from their foreign policy for some time. And, it some point that had to affect their defense procurement.”

Kashin notes that Turkey had tried to boost cooperating with Beijing in the past in the hopes of reducing its dependence on the West.

“Some years before they started to boost the cooperation with Chinese,” Kashin said.

“Then they tried to buy Chinese HQ-9 systems. The Obama administration managed to stop this. But Western influence on them continued to weaken, so now they are ready for their first major purchase outside NATO.”

Indeed, in Kashin’s estimation, it is possible that as Turkey charts its own path, Ankara might try to renew its ties with Beijing.

“I think that some contracts with China maybe coming too,” Kashin said.

“That's is the nature of their political system. They are not following the Western model any more. Erdogan fears that the U.S. wants to crush him. He's moving away.”

Bendett says that the next move is up to the United States and NATO.

“With this deal, the ball is essentially with NATO and U.S. in their response,” Bendett said.

“NATO was probably aware of each step in the S-400 negotiation, so it’s likely that it has a prepared response. This would not be the first time Western advanced technology was shared with a country that also purchases from America's potential adversaries.”

Indeed, from the Russian perspective, Moscow is hoping break the Western grip on Turkey—helping to drive a wedge into the NATO alliance.

There is no real upside for the West in this deal. Ankara’s NATO allies not likely to glean any greater insights into how to defeat the S-400 from Turkey’s purchase of the Russian weapon.

“It’s likely that Russia is not actually compromising its technology - the ‘technical issues’ alluded to earlier in the final negotiation may imply a less-advanced version of the module than the one fielded by Russia itself,” Bendett said.

Kashin noted that Russia hopes to sell the S-400 around the world. And, as such Moscow is not worried about compromising the S-400 system’s technology.

“We are going to widely export it, so there is no need to worry,” Kashin said.