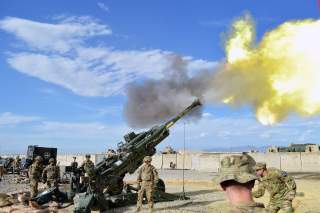 Small drones have become a big threat. A foretaste came in January, when Islamic militants attacked a Russian air base in Syria with thirteen small drones armed with explosive warheads. Though Russian defenses managed to intercept the robotic intruders, the attack suggested that drones can be the poor terrorist's smart bomb. And if a ragtag group of rebels could mount a swarm attack using home-made drones, what could Russia or China do?

Yet the U.S. Army may be ill-prepared to stop swarm attacks, according to a new U.S. National Academies of Sciences (NAS) report. While the army is planning for threats such as drones in terms of terms of decades, the threat is already here and will get worse in the next few years.

The study focused on the threat from—and defense against—small unmanned aerial systems (sUAS). In particular, researchers examined the danger to dismounted U.S. Army and Marine infantry formations of battalion-size or smaller, which lack the transport and power generation capacity for sophisticated counter-UAV defenses.

While the bulk of the study is classified, researchers found that there is reason to worry. Small drones are hard to detect and shoot down, especially for the sort of defensive gear that can be humped in a dismounted soldier's backpack. In addition to high-explosive warheads, small drones can be fitted with a variety of payloads, including small arms, flamethrowers and even chemical weapons. Russia has also equipped small drones with jamming and surveillance devices, and used them to call in devastating artillery barrages against Ukrainian troops.

What makes small drones so scary is that is that attacks can be launched using unmanned aircraft that can be found in a hobby store, such as the three-pound DJI Phantom 3. In other words, the kind of drone that you see your neighbor's kid flying can be utilized as a weapon. "Recently marketed sUASs have technological enhancements (e.g., obstacle avoidance and target-following technologies) that support autonomous flying with no need for a control link or access to GPS," notes the report. "These autonomously guided sUASs can overcome counter-sUAS systems based on jamming radio frequency and GPS signals. The threat these capabilities pose are not looming in the future; they are here today.”

Add in rapid advances in artificial intelligence, as well a the growing ability of robots to collaborate and coordinate among themselves, and swarm drone warfare becomes inevitable. DARPA, for example, now wants to devise tactics for swarms supporting U.S. troops in urban terrain.

The NAS study suggests the problem may be as much mental as technological. While the Pentagon is thinking long-term, the danger is short-term. For research purposes, the army essentially defines near-term as between now and 2025, mid-term as 2026–2035 and far-term as 2036–2050. And to be fair, looking fifteen or thirty years out may make sense for developing expensive systems aircraft carriers and F-35 stealth fighters.

But not when dealing with small drones. "The committee believes that the Army time frames are significantly out of sync with the rapidly advancing performance capabilities of individual sUASs and teams of sUASs," the report states. "Additionally, significant sUAS performance enhancements are occurring so quickly that it is impossible to predict performance capabilities beyond 8 years (the length of the Army’s 'near term'). Unless potential threat sUAS capabilities and counter-sUAS efforts are addressed more rapidly, the vulnerabilities of dismounted infantry and lightly armored vehicles to sUAS threats will grow extremely quickly, potentially to the point where force protection standards cannot be met for soldiers in the field."

The NAS committee came up with a much more compressed time frame for assessing small drone technology: Immediate (this year through 2019), Imminent (2020–2022) and emerging (2023–25). Or put another way, while the army normally contemplates the future of military technology thirty years from now, for small drones it needs to focus on changes that might only less than a decade away.