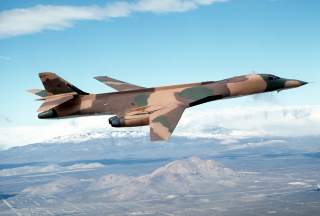 The U.S. Air Force is on track to drop 300 percent more bombs on Afghanistan in 2017 in comparison to the previous year, NBC News reports.

The large uptick in bombings comes amid a renewed push by the Trump administration to end America’s longest war. Former President Barack Obama largely drew down the U.S. presence in Afghanistan and restricted rules of engagement to support operations to the Afghan Security Forces.

Obama’s withdrawal of U.S. troops and robust support for the Afghan Security Forces largely facilitated large gains by the Taliban insurgency. President Donald Trump’s strategy seeks to roll back the militant Islamic group’s rise by supporting the Afghan National Security Forces, building their capacity to keep the militants at bay, and eventually drive the Taliban to the negotiating table.

To bolster this effort, Trump committed thousands of more troops to the war effort for the foreseeable future in an Aug. 21 address pledging not to withdraw from the country until conditions on the ground merited doing so. Additional U.S. forces will also operate under looser rules of engagement that allow them to target Taliban militant safe havens, not just when they attack.