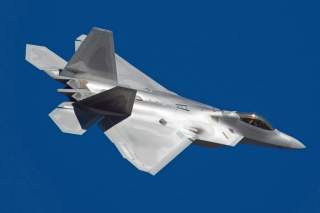 When Syrian warplanes bombed Kurdish fighters around the city of Hasaka on Thursday, their bombs came so close that U.S. commandos feared for their lives. The special operations troops were there assisting the Syrian-Kurdish People’s Protection Units, or YPG.

So the United States scrambled F-22 Raptors — which came within a mile of the Syrian planes.

These stealthy jets are the best air-to-air interceptors in the world and pose an intimidating show of force. Washington has regularly deployed the fighters to provide air cover for U.S. forces in Syria.

No one fired a shot and the Syrian planes flew home, but the close encounter as reported by Reuters is one of the riskiest near-clashes between U.S. and Syrian forces in the war.

The U.S. jets first arrived in Hasaka as two Syrian Su-24s were leaving after a bombing mission on Aug. 18. The Americans on the ground, among hundreds of crack troops working alongside Kurdish forces in northern Syria, were close enough to feel the detonating bombs.

Reuters reported that the Su-24s were already heading home by the time the U.S. planes arrived.

Then on Aug. 19, two Syrian jets — it’s not clear if they were the same ones as before — arrived and encountered the F-22s. Coming within one mile, well within range of the Raptors’ missiles, the Syrian jets turned around and “left without incident,” Reuters reported citing Pentagon spokesman Capt. Jeff Davis.

The Su-24s are older, Soviet-era ground attack planes and would have been no match for the stealth Raptors, which are primarily designed to kill other aircraft. The attacks on the Syrian-Kurdish forces “is very unusual, we have not seen the regime take this kind of action against YPG before,” Davis told Reuters.

Throughout, the Pentagon was desperately communicating with the Russian military trying to sort out whose jets were bombing Hasaka. The Russians responded that they were not theirs, so the Americans told them to order the Syrians to knock it off — or be shot down.

Hasaka contains a regime enclave surrounded on all sides by Kurdish forces, and it rests deep within the autonomous Kurdish region of Rojava. Both Kurdish and regime troops have navigated an uneasy relationship for years, and fought on the same side to expel the Islamic State from the area last year.

But as the two sides began fighting this week, the Syrian government accused the Kurdish forces of trying to take over, and “stealing cotton, oil, kidnapping civilians, and spread chaos,” a statement from the Syrian Arab Army read.

The Kurdish YPG accused the “totalitarian regime in Hasaka” of conspiring with the Turkish government to undermine the Kurds’ democratic system.

This isn’t the first time Raptors played tag with foreign jets in the Middle East. In early 2013, F-22s intercepted two Iranian F-4 Phantoms that approached an American drone over the Persian Gulf. The Raptors outright taunted the Iranians, with one stealth fighter flying underneath an F-4 to eyeball its payload before pulling up on its left wing.

Raptors were also present for the opening air strikes on the Islamic State’s strongholds in Syria in September 2014. The stealthy, radar-evading warplanes joined waves of U.S. and allied bombers on the first night — and the F-22s carried out their first combat mission ever near Tishrin Dam by dropping 1,000-pound guided bombs on the terror group’s positions.

But mainly, the stealth fighters have provided cover for their less-than-stealthy counterparts. In January 2015, F-22s escorted Jordanian planes on revenge strikes after a Jordanian pilot was shot down and executed by the Islamic State on camera.

As destabilizing as a clash between America and Syria in the skies would be, a dogfight between U.S. and Russian aircraft would be even worse. We’ve come terrifyingly close to witnessing it.

In June, U.S. F/A-18 fighters intercepted two Russian Su-34s — an advanced multi-role warplane — after the Russian planes bombed a training camp for U.S.-backed rebels. And there was the Turkish F-16 which shot down a Russian Su-24, the same type of aircraft warned away by the F-22s this week, which ruptured relations between Ankara and Moscow.

The Pentagon and the Russian Ministry of Defense have communication channels specifically set up to keep their planes away from each other — and thus avoid a clash in the air.

But that Washington had to contact Russia to tell the Syriansto knock off the bombing shows just how inefficient the system is in managing a complex air war with multiple conflicting actors.

And the United States insists it will use lethal force to protect its commandos on the ground.

“We view instances that place coalition personnel at risk with the utmost seriousness, and we do have the inherent right of self-defense,” Davis, the Pentagon spokesman, told Reuters.