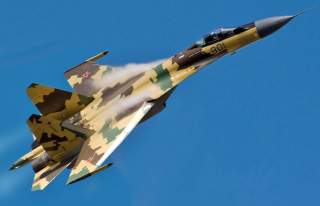 “The Chinese air force recently sent its Su-35 fighter jets to take part in a joint combat patrol over the South China Sea,” according to a release from the Chinese Ministry of Defense. “This is the first time the People's Liberation Army Air Force has made public the deployment of its Su-35s, built by Russia's Komsomolsk-on-Amur Aircraft Production Association and introduced to China in late 2016.”

According to the Chinese Defense Ministry, the PLAAF did not reveal exactly when the overflight took place. Nor is there any indication as to how many Su-35s participated in the exercise—but China is known to have purchased 24 of the aircraft from Moscow. Moreover, the official Chinese government release did not make any reference to the J-20, which the PLAAF recently declared to be operational. Regional media, however, is reporting that the advanced stealth aircraft are present in the region and are taking part in the Chinese patrols of the South China Sea.

The Chinese deployment comes on the heels of the Arleigh Burke-class destroyer USS Hopper (DDG-70) conducting a freedom of navigation operation (FONOP) within 12 nautical miles of China’s Scarborough Shoal island in January. Additionally, a U.S. Navy carrier strike group led by USS Carl Vinson (CVN-70) is scheduled to make a port call in Vietnam—which is likely to draw Beijing’s ire.

Indeed, the Chinese state-owned Global Times suggested that Beijing’s actions are a direct response to American provocations. “The appearance of advanced PLA fighter jets, capable of attacking surface combat vessels in this region is sort of a reaction to the provocation by the U.S.,” Xu Guangyu, a retired Chinese People’s Liberation Army major general and senior adviser to the China Arms Control and Disarmament Association, told the Global Times.

Moreover, from Xu’s point of view, the PLAAF putting the Su-35 into service over the South China Sea is an indication of the growth strategic partnership between Beijing and Moscow as the two great powers balance against the American-led liberal international order—or liberal hegemony as some would say. “We just received a group of jets from Russia last year, and now we can put them into a real combat mission in the South China Sea,” Xu said. “It also shows that China-Russia military cooperation is solid, mutually beneficial and reliable.”

Indications would suggest that Xu’s assessment is correct. The partnership between Russia and China is growing deeper and could one day evolve into a full-blown alliance if Washington does not play its cards right.