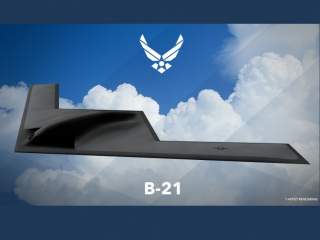 The U.S. Air Force has revealed the designation and released concept art of the shadowy Northrop Grumman Long Range Strike Bomber (LRS-B). The aircraft will be designated the B-21. But the B-21 Mission Design Series—as designations are referred to in the Pentagon—is a break from tradition; many observers had expected the new stealth bomber to be called the B-3.

According to the U.S. Air Force, “the designation B-21 recognizes the LRS-B as the first bomber of the 21st century.” The service notes that its rendering of the aircraft is based on Northrop’s preliminary design concept. There is no prototype of the LRS-B that has been built yet.

The B-21 bears more than a passing resemblance to the current generation Northrop B-2 Spirit. That because the Air Force consciously chose to use mature technologies for the LRS-B program. Moreover, the B-2 is the only currently operational aircraft in the Pentagon’s inventory that was designed to be able to counter low-frequency radars operating in the UHF and VHF bands. The LRS-B will advance those broadband all-aspect stealth capabilities to counter the extremely high-end threats that are expected to emerge in the coming decades.

“The B-21 has been designed from the beginning based on a set of requirements that allows the use of existing and mature technology,” Air Force Secretary Deborah Lee James said—speaking at the Air Force Association’s Air Warfare Symposium on February 26 in Orlando, Florida.

Earlier this month, in his testimony before the Senate Armed Services Committee, Air Force chief of staff Gen. Mark Welsh reiterated the service’s need for next-generation warplanes to counter rising challenges from great powers. “The platforms and systems that made us great over the last fifty years will not make us great over the next fifty,” Welsh told the Congress. “There are many other systems we need to either upgrade or recapitalize to ensure viability against current and emerging threats. . . the only way to do that is to divest old capability to build the new.”

The B-21—like the B-2 Spirit, F-22 Raptor and F-35 Lightning II before it—will receive a name to go along with its designation. Air Force leadership has already announced that it will pick a name from suggestions submitted by servicemembers. “This aircraft represents the future for our Airmen, and [their] voice is important to this process,” James said. “The Airman who submits the selected name will help me announce it at the [Air Force Association] conference this fall.”

Meanwhile, development work on the B-21 LRS-B has resumed at Northrop now that Boeing’s protest to the Government Accountability Office has been overturned. The B-21 recently entered into its Engineering and Manufacturing Development phase—but the program might yet run into hurdles. Senator John McCain—chairman of the Senate Armed Services Committee—recently threatened to block funding for the program unless the contract was restructured.

If the Air Force can overcome the various obstacles it faces, the service plans to field the B-21 in mid-2020s. As for what this shadowy aircraft might be called. . . I would suggest the Air Force call it the B-21 Shadow.