Revealed: Behind the Shadowy B-21 Stealth Bomber's Veil of Secrecy 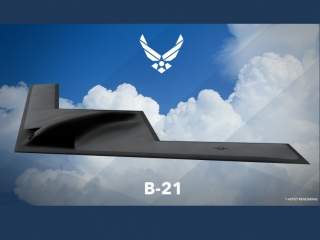 The U.S. Air Force has disclosed a trove of additional details about its secretive Northrop Grumman B-21 Long Range Strike Bomber (LRS-B), but is refusing to divulge information about how much the stealthy new warplane will cost, despite congressional pressure.

The Air Force is worried that disclosing the price might compromise the bomber’s capabilities. The service’s assertions were meet with skepticism on Capitol Hill, however. Sen. John McCain (R-AZ), chairman of the Senate Armed Services Committee (SASC), took the Air Force to task for hiding trivial details about the B-21 for the sake of secrecy. “Why would you not ever want to tell the American people how you’re going to spend their dollars?” McCain asked on March 8.

“We’re trying to balance the transparency that we want to do with the public so that they understand what we’re doing, but we’re also trying to protect the critical capabilities of this asset,” Lt Gen. Arnold Bunch Jr. military deputy to the office of the assistant secretary of the Air Force for acquisition told the SASC. “We’re try to prevent the ability of individuals to link different pieces that may be unclassified together to get an idea of where the money is being spent.”

An incredulous McCain was not pleased. “General, you’re not serving the nation or the taxpayers if they don’t know how much of their taxpayer dollars are being spent. You and I have a very different view of our obligation to the taxpayers,” McCain said. “Frankly, I’ve never heard of this before—that they shouldn’t know how much of their taxpayer dollars that they pay in taxes is being spent because someone might connect the dots. What is that all about?”

Nonetheless, the Air Force has released which subcontractors are working on the program—which arguably offers analysts much more information from which to piece together the B-21’s projected capabilities than its price tag. According to the Secretary of the Air Force, Deborah Lee James, the subcontractors are Pratt & Whitney, BAE Systems, GKN Aerospace, Janicki Industries, Orbital ATK, Rockwell Collins and Spirit Aerosystems. “Now, Pratt and Whitney, of course, is our engine provider, the other six will work on airframe or mission systems. And again, that is the totality of the information I'm able to share on this aspect at this time,” James told reporters at the Pentagon on March 7. James added:

“Strategic ambiguity is important. The technology is important. So I don't foresee that you're going to know, for years, very much more about the technology. As I mentioned earlier, this is a balancing act. This is a desire to share information with the public, but also protect that information, and not to put out so much information that a possible adversary can connect dots in ways that we don't wish those dots to be connected.”

While the Air Force is not going to say more, the service has offered up some tantalizing clues about the B-21’s capabilities with its list of subcontractors and its public statements. “When it came to the B-2, everything was new, meaning it was a new airframe, new components were going to go into that airframe and the integration challenge was enormous.  So it was the equivalent of a miracle a day had to transpire,” James said. “In the case of the B-21, we do have a new airframe. Integration is always a challenge, but we are using a mature technology, so the risk is more bounded.”

Indeed, a lot can be gleaned from the list of subcontractors. GKN is well known for building assemblies for aerostructures, engine products, landing gear and wiring systems and special products including glass, acrylic and polycarbonate transparencies and ice protection systems—especially for stealth aircraft. Meanwhile, Janicki Industries is well regarded within the aerospace industry for building complex composite structures. Spirit Aerosystems and Orbital ATK make aerostructures—like fuselages and wing components for large airframers such as Boeing and Lockheed Martin. Last but not the least, Rockwell Collin is famous for its cockpit displays and avionics.

The two most interesting subcontractors are Pratt & Whitney and BAE Systems. Given Pratt & Whitney’s product range and James’s statement that the service will use mature technologies for the B-21, the company only has two active production lines suitable for a bomber application—the F100 and the F135. The F-22 Raptor’s F119 is long out of production and it is not an ideal propulsion solution for a subsonic aircraft. Meanwhile, the F100 is a dated design, but the latest -229 variant produces 17,800lbs of dry thrust. If the Air Force opted for a less efficient four-engine design, unaugmented F100s would be the best choice.

Given what is known about the B-21—which is likely to be somewhat smaller than the current B-2—the aircraft will likely use a pair of unaugmented 28,000lbs-class F135s engines from the F-35. With some tweaks, such as an increased bypass ratio, a version of the F135 could probably produce more than 30,000lbs of thrust while potentially increasing fuel efficiency. Sixty thousand pounds of thrust should be more than adequate for a highly efficient flying wing that’s slightly smaller than the B-2.

However, the B-21 might be provisioned to accommodate whatever engine ultimately comes to fruition from the Air Force’s adaptive-cycle engine program—variously called ADVENT, AETD and AETP—for adoption at a later date. If the service is serious about an initial operational capability date around 2025, the new bomber will necessarily use an existing propulsion plant. It takes a long time and large sums of money to develop a new turbine engine. It’s also not an endeavor without risk—look no further than China’s frustrated efforts to develop an indigenous jet engine.

Meanwhile, BAE Systems—whose Nashua unit used to be Lockheed Martin’s Sanders division—is a master of electronic warfare. The BAE Systems division developed the extremely capable electronic warfare suites for the F-35, F-22 and the future Eagle Passive Active Warning Survivability System (EPAWSS) for the F-15 fleet. The company also developed the B-2’s AN/APR-50 Defensive Management System. The B-21’s electronic warfare systems are, therefore, most likely an advanced derivative of the F-35’s AN/ASQ-239 system—which is the company’s most advanced product. However, it is known that BAE Systems offered a much more capable next-generation electronic warfare suite that was rejected because of its lack of maturity. The B-21—with its open architecture design—will be provisioned to accept replacement hardware as time goes on.

What was left unsaid at the Air Force press conference, but can be inferred due to its omission is that the Northrop Grumman is building the B-21’s radar. Raytheon—the only other contractor capable of building an advanced active electronically scanned array (AESA) radar for a combat aircraft—was conspicuously absent from James’s list of contractors. Thus, it can be inferred that the B-21 probably uses an advanced derivative of the F-35’s APG-81 AESA—which despite some initial teething problems—some enormous promise for the future.

Thus, despite the Air Force’s efforts to restrict information about the B-21, one can divine a relatively clear picture of the new bomber’s capabilities whether or not the price tag is disclosed.