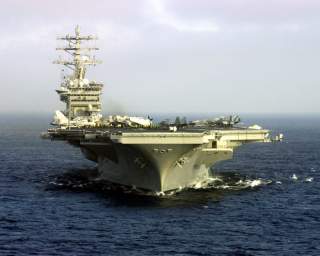 China may have started construction on its second aircraft carrier according to new satellite imagery. The images—which were obtained by the British defense trade journal IHS Jane’s from Airbus Defence and Space—shows that a new ship is under construction in the same dry dock that was used to refurbish the former Soviet carrier Varyag during its conversion into China’s Liaoning. This would be China’s first indigenous flattop—if it were indeed a carrier.

The Jane’s analysis indicates that the ship might be between 558ft and 885ft long with a beam greater than 98ft. That’s a little small for a conventional aircraft carrier—and the Jane’s analysts note that they can’t conclusively say the new ship is a carrier. But that length—assuming the Jane’s analysts are correct—would be about the same as India’s Vikramaditya. The beam, however, is somewhat narrow—most carriers are much wider—which means this could be an amphibious assault ship or something else entirely.

It should be no surprise that Beijing might be building new carriers. Indeed, the Pentagon’s 2015 annual report to Congress on Chinese military power states: “China also continues to pursue an indigenous aircraft carrier program and could build multiple aircraft carriers over the next 15 years.” Indeed, Taiwanese and Hong Kong media have reported that China could launch its first indigenous carrier —the Type 001A—on Dec. 26 to mark the 122th anniversary of Mao Zedong’s birthday. Chinese papers have also previously reported that an indigenous carrier is being built in Dalian.

While China might be building a new flattop, the vessel is likely to be much smaller than the U.S. Navy’s 100,000-ton Nimitz or Ford-class nuclear-powered carriers. The Chinese vessels will probably be smaller, conventionally-powered either by steam or diesel propulsion and probably will not have electromagnetic catapults.

The reason is simple—China does not have the experience in designing and building large military vessels the size of a carrier or amphibious assault ship. It lacks the requisite expertise in designing and building the propulsion systems for such a vessel. Further, China is lagging behind on metallurgy for the vessel’s hull. As for catapults—it took the U.S. Navy years to perfect steam catapults and the jury is still out on Ford’s Electromagnetic Aircraft Launch System (EMALS). Stealing technology can get Chinese engineers only so far—practical experience makes a difference.

China simply does not currently have the technology to build nuclear-powered carriers. Right now, the Chinese are struggling to build modern nuclear reactors for their submarine fleet. Indeed, Chinese nuclear submarines are comparable to 1970s vintage Soviet designs. China is nowhere near ready to scale up those designs to be suitable for a carrier.

Truth be told, Beijing seems to be aware of its shortcomings. Beijing-based Chinese naval expert Li Jie acknowledged the problem to the South China Morning Post late last year. “Compared with submarines, a carrier is much bigger,” Li told the Chinese daily. “It will take time for our nuclear engineers to develop a safe and powerful engine capable of driving a huge platform of more than 100,000 tonnes.”

It is conceivable that China might attempt to follow in the footsteps of the recently retired USS Enterprise (CVN-65), which used eight submarine reactors. The United States didn’t have the technology to build reactors suitable for an aircraft carrier when Enterprise was built. Instead the Navy opted for eight smaller reactors, but at the cost of a lot of space. The later Nimitz-class has two large reactors instead.

Meanwhile, China is still well behind the United States and Russia in terms of metallurgy and propulsion technologies. Chinese shipyards have had past issues with poor metallurgy for their earlier naval vessels—but China will probably solve the problem eventually. The Indians, who traditionally imported high-strength steel from Russia, have developed their own indigenous alloys. The Chinese will, no doubt, accomplish that same goal in time.

In terms of propulsion, the Chinese are still well behind the curve but it is one area where they can probably leverage experience with commercial maritime propulsion technologies. But they probably do not have the wherewithal to build propulsion systems that can support a carrier the size of a Nimitz—a smaller ship is thus a more likely prospect. “But as Marine gas turbines, like diesel design, have not been a bright spot in Chinese industry,” as Gabe Collins and Lt Cmdr. Michael Grubb note in a Naval War College study. “Their development has been severely hindered by the slow place of indigenous jet engine development, which is symptomatic of larger issues within the Chinese aerospace industry as a whole.”

As for catapults—the U.S. Navy has had a hard enough time with the EMALS—it is highly dubious that China could master the technology this quickly even if it stole the entirety of Naval Air Systems Command’s data on the program. Stealing technology is easier than truly understanding it from the ground up. It is probably why China has trouble building hardware such as jet engines and gas turbines. Nonetheless, some Chinese officials assert their carrier will have an electromagnetic catapult. Steam catapults are a more likely prospect, but can still be tricky. The smart money is on a pure ski-jump design.

Collins and Grubb accurately sum up the Chinese carrier question in this statement: “The production of [ultralarge crude oil carriers] demonstrates the ability of Chinese shipyards to build hulls of aircraft-carrier size and strength, but their ability to integrate the complex matrix of aircraft, catapults, arresting gear, weapons systems, and large propulsion plants required for an operational aircraft carrier remains in doubt.”