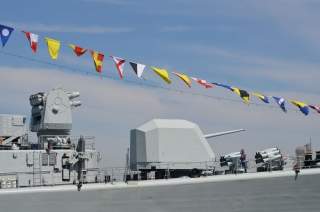 Terriclaims, short for territorial reclamation, is a term that is useful for describing a nation’s reclamation activities when it seeks to preserve or expand territory as part of a broader geopolitical ambition. States have reclaimed land for millennia, but no nation has sought to do so as far away from its own national boundaries as China. Moreover, the clandestine manner which China is undertaking these activities in the South China Sea is cause for concern.

To understand why China’s terriclaims are unusual, it is useful to consider some other state’ building projects. China is not building a Palm or World Islands, like the Emirati city of Dubai. Dubai’s multi-billion dollar reclamation project begun in 2001 envisions multiple archipelagos that emanate from the Emirati coast into the Persian Gulf.

Palm Jumeirah, the most recent archipelago completed in 2006 and configured in the shape of a palm, includes luxury homes, various resorts, and a monorail spread over miles of newly reclaimed land.

Rather, it appears that China’s building projects are part of an expansive territorial grab or to make China’s disputed Nine-Dash Line claim a reality. These terriclaims seem to be China’s latest attempt at a slow and methodical encroachment tactic to assert control over the SCS, a policy pejoratively referred to as “salami-slicing.” While China’s activities in the Spratlys may have only grabbed international attention recently, its use of this tactic is hardly novel.

Terriclaims are a novel attempt by China to reset maritime boundaries in the South China Sea, but their emergence should not take observers by entirely by surprise. This is becauseterriclaims are the latest incarnation of a long history of reclamation in China, which has traditionally been resourced and supported at all levels of Chinese government.

China has a legacy of reclamation dating back to the 5th century B.C., when it used dredging and reclamation techniques to construct the Grand Canal. The ancient and Venice-like city of Suzhou was built on reclaimed land.  In modern times, China has reclaimed massive parts of Macao, Shanghai, and even use reclamation in the recent expansion of Hong Kong International Airport.

The political placement and maritime-focus of the State Oceanic Administration (guójiāhǎiyángjú 国家海洋局), under Minister Liu Cigu, make it unique out of these four. The SOA held the leadership role in reorganizing most of China’s maritime civilian and paramilitary organizations in 2013.

This coincides with the creation in 2012 of a new, high-level advisory group for maritime security issues by the Politburo Standing Committee, whose first leader was Xi Jinping. The evidence suggests that the SOA is leading the terriclaim efforts under direction from the highest levels in Beijing.

China is also not the first state to use reclamation to the South China Sea. In 1999, Malaysia constructed a two-story concrete building on Investigator Shoal (midway between the Philippines and Malaysia) along with a helipad, radar station, and pier. Taiwan carried out major reclamation projects on Pratas Island in 2007. China terraformed Woody Island in the Paracel Islands to include a 7,900-foot runway, three ports, and PLA Navy and Air force assets.

However, China not only appears to be protecting its claims but expanding upon them with these new massive terriclaim projects that have a uniquely military bent. The progression of these terriclaims’ point to the construction of airstrips, hardened facilities, storage centers, staging areas, and deep-draft channels for shipping. Enhanced civilian communication infrastructure, scientific research stations, or fishing support facilities would require neither such a large footprint nor the sense of urgency and secrecy in their construction. China watchers, such as Japan’s Yoji Koda, contend that potential reclamation (terriclaim) efforts on Scarborough Shoal alone could potentially create an island that contains multiple square miles of new land.

China’s terriclaims may have significant second and third order effects. Terriclaims, if sanctioned by the other SCS claimants, ASEAN, or the broader international community, could result in significant maritime territorial loss if a terriclaim is legitimized. This could also lead to conflict. The South China Sea has seen conflict over territory in the past, but China’s capabilities and global clout have grown substantially. At the same time, this tactic need not be limited to the South China Sea, and may be used in other vulnerable littoral areas. There are more than 150 littoral countries that claim over 36 percent of the world’s maritime domain. The low-lying, littoral nations in the Caribbean Sea, Baltic Sea, Mediterranean Sea, Persian Gulf, Oceania, and Arctic are all susceptible to terriclaiming. The low-water depths and close proximity of other littoral nations in these contiguous resource-rich coastal zones make terriclaiming possible and, perhaps, desirable. Additionally, the 1982 United Nations Convention on the Law of the Sea (UNCLOS), has no provisions to account for terriclaims. The provisions that could be interpreted to challenge or support terriclaims within UNCLOS are ambiguous at best.[1]

Regardless of UNCLOS’s relative silence on these issues, terriclaims need to be addressed. If China’s terriclaims are legitimized by the international community’s inaction, this would not only reward Beijing’s behavior, but also give the Chinese carte blanche to continueterriclaiming in other areas. More importantly, sanctioning terriclaims would encourage other states to follow China’s lead. If a solution is not found, terriclaims will wreak havoc on the maritime environment and its frameworks. At the very least, the perceived military bent of China’s terriclaims will continue to unnerve other claimants.

Unless the legal ambiguity is removed or China’s terriclaims are directly challenged, aterriclaims-race could ensue between China and the other claimants. There are two possible responses the international community should consider.  First, signatory states could revise UNCLOS to account for terriclaims or attach an addendum agreement similar to the 1995 Fish and Stock Agreement. Yet, a far-reaching revision or addendum of UNCLOS is unlikely. In order for a revision to occur, Beijing’s support would undoubtedly be required as a member of the Security Council and the regional leader. Second, interested states could quash terriclaimsthrough arbitration in either International Tribunal on the Law of the Sea (ITLOS) or the International Court of Justice or through a broader framework or agreement. Conversely, litigation and arbitration may not necessarily be a feasible solution either considering the current lengthy and drawn-out legal battle between the Philippines and China. Depending how the litigation proceeds, it may be more likely that the parties will fall back on some form of bilateral or multilateral agreement, similar but more robust than the 2002 Declaration on Conduct, that seeks rapprochement over the terriclaims between ASEAN or ASEAN-member claimants and China.[2]

China’s terriclaims manifest the great lengths to which China is willing to go to dominate the South China Sea. And despite its seeming novelty, the fact that this tactic has such a longstanding role in Chinese history means that we should not expect to see it disappear from Beijing’s toolkit any time soon.

[1] See Articles 7(2) (on sedimentation and deltas), 76 (fixing boundaries in lieu of continental shelf claims), 60 (artificial islands, installations, and structures), and 121 (differentiation between island and rock claims).

[2] “Declaration on the Code of Conduct between Parties in the South China Sea,” ASEAN.

Wilson VornDick is a Lt. Commander in the U.S. Navy and is assigned to the Pentagon and previously to the China Maritime Studies Institute at the U.S. Naval War College. He explores the geopolitical interplay of both terriclaims and other topics in the South China Sea in his Harvard graduate thesis to be published this May. These are his personal views and are not associated with a U.S. Government or U.S. Navy policy.