Revealed: This Could Be America's Missile Shield from North Korea and China 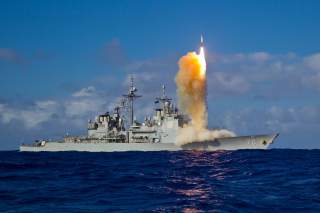 "We are looking at Aegis Ashore to protect our Pacific areas," Mattis told the House Armed Services Committee, suggesting a fixed site could augment existing BMD-capable Navy ships on patrol in the region.

Aegis Ashore technology builds upon the success of Aegis missile defense at-sea by establishing land sites that can detect and destroy incoming enemy ballistic missile attacks. An Aegis Ashore site became operational in Romania in 2015, and another is slated to stand up in Poland sometime later this year. The system uses Aegis radar in tandem with SM-3 interceptor missiles to track and destroy ballistic missile attacks.

Adding a land-based Aegis BMD technology brings a potential range and target envelope advantage, as it could defend areas less reachable to Navy ships. While ship-fired Aegis BMD does have quite a range and is able to destroy approaching threats from beyond the earth's atmosphere, a land site could naturally, in some circumstances, preclude a need for Aegis BMD capable ships from needing to patrol certain areas at certain times.

Thus far, going back to the Pentagon's previously established European Phased Adaptive Approach Aegis Ashore has primarily been oriented toward protecting the European continent from potential future ballistic missile threats such as Russia and Iran, among others. Secretary Mattis is now suggesting the shore-based SM-3 interceptors could migrate to Aegis as a compliment to the existing Terminal High Altitude Area Defense (THAAD) weapon now protecting the region.

The prospect for Aegis Ashore in the Pacific emerged during a HASC hearing on the Pentagon's newly released Nuclear Posture Review when Guam Congresswoman Rep. Madeleine Bordallo asked Mattis about plans to protect assets based in Guam such as B-2, B-52 and B-1 bombers.

"Guam holds vital strategic bases to aid our defense, and in your strategy you call for investment in layered missile defense," Bordallo said.

Bordallo's concern resonates alongside of the consistently discussed threat that North Korean short and intermediate range ballistic missiles pose to the region; it is often cited as a reason to hesitate about striking North Korea given the knowledge that the North would be expected to immediately fire its arsenal of missiles toward South Korea and Guam.

It was in response to this that Mattis raised the prospect of bringing Aegis Ashore to the Pacific to, along with THAAD and Navy Aegis BMD ships, provide the layered defense system Bordallo referred to.

Missile Defense Agency developers explain that the Aegis Ashore program, which has been successful thus far, is preparing to fire a longer-range and more advanced SM-3 IIA missile for the first time in coming months.

​In existence since 2004, Aegis BMD is now operating on 28 Navy ships and with a number of allied nations. U.S. allies with Aegis capability include the Japan Self Defense Forces, Spanish Navy, the South Korean Navy, the Royal Australian Navy, Italy, Denmark and others, MDA officials said.

Now that it is being prepared for Aegis Ashore, it seems clear that a longer-range SM-3 IIA weapon could prove relevant in any defense against North Korean or Chinese ballistic missile attacks. The Missile Defense Agency and Raytheon have configured the emerging SM-3 IIA missile with a more “sensitive” seeker and software designed to accommodate new threat information.

Amy Cohen, SM-3 Program Director, told Warrior Maven in an interview a few weeks ago that the SM-3 IIA program is on track.

​“We can see a threat that we are engaging much sooner. As soon as we open our eyes, we can see threats much earlier and we have the ability to track them. This helps us with how we need to maneuver the kinetic warhead to ensure that we have a kinetic engagement with the threats that we are flying against,” Cohen added.