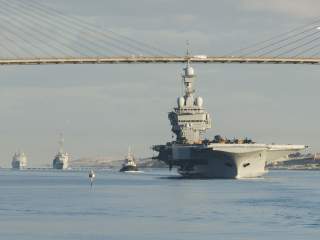 The French aircraft carrier Charles de Gaulle launched air strikes on the Islamic State from the Persian Gulf on December 20. This followed strikes from the eastern Mediterranean in November.

De Gaulle is the current flagship of Task Force 50, “which plans and conducts strike operations in the U.S. 5th Fleet area of operations,” according to the U.S. Navy.

The carrier has both Rafale and Super Etendard multi-role fighters. The latter are rather old—dating to the 1970s—and will retire from French service after their mission in the Gulf is complete.

After that, Argentina will become the sole Super Etendard operator in the world, meaning the strikes in Iraq and Syria may be the vintage jets’ last combat mission. De Gaulle isn’t alone. According to the U.S. Navy:

“This marks the first time the French Navy has served as commander of a U.S. task force in this region. CTF 50 plans and conducts coalition strike operations in the Middle East and reports directly to Commander U.S. Naval Forces Central Command.”

Zack Baddorf is a contributor to War Is Boring, where this article and video first appeared.