Revealed: This Is How China Plans to Modernize Its Military 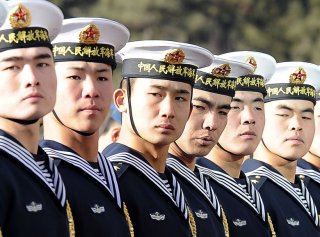 Chinese military muscle was on full display in Beijing this week, with hundreds of new weapons platforms, fly-bys, 12,000 troops, and foreign dignitaries all in the global spotlight of Tiananmen Square. Yet, it wasn’t just the land-based anti-ship ballistic missiles and ground assault units that stole the show. Simmering behind the scenes, and underpinning Chinese President Xi Jinping’s evolving political-military agenda, were the renewed discussions of imminent plans for an overhaul to the operating structure of the People’s Liberation Army (PLA).

Beginning with Xi’s announcement of a 300,000 reduction in Chinese troops from the Tiananmen Square rostrum, subsequent plans will include a comprehensive upending to the military’s existing structure, a vision of U.S.-style joint command structure adapted to the Chinese forces. This is no small undertaking for the Chinese, akin to the introduction of the U.S. National Security Act in 1947, with a similarly large scale of ripple effects throughout the political system.

Chinese military expert Dennis Blasko notes the PLA is presently structured into approximately ten major organizations, at three levels, with headquarters located predominantly in Beijing. The Central Military Commission (CMC), chaired by Xi, was established by both the Chinese and Communist Party constitutions to command the Chinese armed forces and determine national defense policies. Aside from Xi, it is made up of civilians and senior uniformed military officers, all of whom must necessarily be party members.

Blasko compares the CMC to the work of the U.S. commander-in-chief and secretary of defense, but divided between far more employees. Beneath the CMC, policy directives are executed by four General Departments that act as a joint staff for all of the Chinese armed forces. Lines of command and responsibility are further divided geographically, with China presently split into seven military regions.

As Xi looks to make his visions for restructuring a reality, sources suggest he is aiming to adapt the existing structure by unifying the Chinese army, navy, air force, and strategic missile corps under one command. PLA numbers will first be cut down to around two million troops even as the navy and air force continue to expand. Other probable reforms will have the armed police shifting to a national guard role with a focus on domestic security.

Military regions will likely be consolidated to as few as four; the ranks of local commanders will be downgraded to reduce their political influence. The Ministry of National Defense will assume a greater role in defense policy and military affairs, in addition to taking on oversight of military ideology, officer promotions, and the departments of logistics and armaments.

While this transformation marks a seismic shift in Chinese military organization, it does not come as a total surprise: headlines of proposed reforms have appeared on and off over the last two years. Perhaps what has changed is Xi’s commitment to the structural overhaul and desire to lead a military capable of the same networked warfare demonstrated by the United States and its allies.

For Xi, China’s dream of a strong military is supported by cutting-edge technology but requires a reshaping of the PLA’s daily operations in order to be effective. Cutting 300,000 personnel is one such step in the right direction, as shifting from investments in traditional land forces to the navy and air force requires fewer, but better-trained, military personnel.

Initial efforts to pave the way for Xi’s reforms were seen in the far-reaching anti-corruption campaign in the PLA ranks. Those that have already been weeded out from within the PLA– including CMC vice-chairmen Xu Caihou and Guo Boxiong, and over 4,000 officers–are those that were in staunch opposition to Xi’s proposed reforms. Now, those that remain in positions of power, may still be corrupt, but at least they will implement the structural changes Beijing wishes to see.

For those less enthusiastic at the prospect of a new change of command and operations in the PLA, a recent op-ed in the PLA Daily has aimed to capture their attention, encouraging military leaders “[To] strengthen their study of Xi’s important expositions on deepening defense and military reform.” Immediately following the surge of nationalism from Thursday’s parade, the op-ed further urges Xi to “seize the high ground” in implementing leadership and command adjustments, enacting systemic and policy reforms, and overseeing increased civil-military integration.

While Xi touted China’s commitment to peaceful development and promises to “never seek hegemony or expansion,” the V-day cavalcade painted an entirely different picture. China now possesses much of the hardware and capabilities of any other modern military power. Without Xi’s planned restructuring, however, this cutting-edge hardware will be wielded by a bureaucracy stuck in the 1950s. The stakes are high for President Xi: with domestic challenges increasingly prominent, the military component of Xi’s “Chinese dream” needs to be realized in order for Xi to continue to maintain credibility, party legitimacy, and leadership of the Chinese armed forces.

Lauren Dickey is a research associate for U.S. foreign policy at the Council on Foreign Relations and a PhD candidate in the War Studies department of King’s College London.

This piece appears courtesy of CFR, where it was first posted.