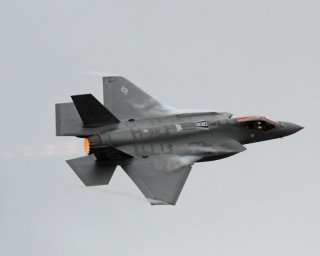 After the leaking of a report about the recent failure of an F-35 to win in a dogfight against an F-16D, debate has intensified about the future nature of air to air combat. In a recent Strategist post, Andrew Davies identifies the importance of combining long-range air-to-air engagement using ‘Beyond-Visual Range Air to Air Missiles’ (BVRAAMs), with the advantage bestowed by stealth technology to reduce detectability of the aircraft, as well as exploiting superior sensors, information processing and electronic warfare capability.

Davies also notes that it is yet to be demonstrated how effective these capabilities will be in a future operational environment, stating “…there are reasons to wonder how effective the F-35’s bag of tricks will be into the future, especially as counter-stealth systems evolve, and I’d like to see it carry more and longer-ranged weapons…” Clearly the F-35 was designed to undertake a particular approach to air-to-air combat in mind (long-range attacks) rather than close-in dogfighting. This highlights a key question that is now generating significant debate: “Are our current assumptions about future air combat—that BVR engagement will dominate and ‘dogfights’ have had their day
“—correct?

The underlying basis for current assumptions about the ascendance of long-range air-to-air combat and the demise of the dogfight is that U.S. and allied forces will always have a clear and sustainable ‘knowledge edge’ over any adversary in a manner that bestows superior situational awareness to permit unrestricted use of BVRAAMs. In this regard, the true success of the F-35 in tactical air-to-air warfare may in fact depend on an ability to preserve a knowledge edge at the strategic level in the face of determined efforts by future adversaries to decisively win an information battle at the outset of any future conflict.

In considering future adversaries, Chinese information warfare doctrine makes clear the requirement to attack U.S. C4ISR systems, including satellites, from the outset or even prior to, any military conflict. This information warfare campaign will be fought in space, cyberspace and across the electromagnetic spectrum. The PLA sees the information battle-space as an integrated environment comprising both cyberspace and electronic warfare, and base their approach to these domains around the concept of Integrated Networked Electronic Warfare (INEW).

General Dai Qingmin, PLA, states that a key goal of the PLA’s approach to INEW is to disrupt the normal operation of enemy battlefield information systems, while protecting one’s own, with the objective of seizing information superiority. Therefore, winning in the air against the PLAAF may be determined as much by which side wins these information warfare campaigns, as through success in tactical beyond-visual range air to air engagements. Imagine no data links between the F-35s and the AWACS; AESA radars on an E-7A Wedgetail spoofed; ASAT attacks that bring down strategic communications or computer-network attacks that strike logistics or which jam GPS signals, and the first shots fired are not missiles but satellites silenced by computer hackers or ground-based jamming. Furthermore there will be an incentive to strike quickly and decisively, with an information ‘battle of the first salvo’ effect emerging. Without the flexibility bestowed by these systems, the F-35 pilot must rely on on-board sensor systems such as its AESA Radar and Electro-Optical Targeting System (EOTS) to detect, track and engage targets which increase the detectability of the aircraft and potentially bring the F-35 into the envelope of an opponent’s within visual range systems.

Does the F-35s dependence on maintaining information superiority make it ineffective? If the F-35 is relegated to a long-range BVR-AAM role, and if future air power doctrine is formulated with this approach in mind, then the effectiveness of the platform—and of Western air power—is at risk if key C4ISR systems can be attacked. In this regards, any assumption that modern air forces don’t dogfight is a dangerous one to make. Such an assumption lacks credibility as no air force would cede control of the air simply because it cannot operate with all desired advantages. Air forces have to be prepared to dogfight—even with the F-35 as their fighter. Finally, future adversaries will not be as courteous as to fight the U.S. and its allies on their own terms and in a manner that reinforces their advantage. The enemy always gets a vote.

In the future, what wins in the air is firstly winning the information battle across space, cyberspace and the electromagnetic spectrum to gain superior situational awareness and deny it to an opponent at the strategic, operational, and tactical level. An inability to counter an adversary’s information warfare systems will significantly reduce the ability of tactical combat aircraft like the F-35 to gain sufficient situational awareness to employ BVRAAMs effectively, and thus fight in our preferred approach to air operations.

It seems unlikely our future adversaries will fight in a manner most conducive to their own defeat, and it’s a safe bet that Chinese and Russian analysts understand all the weaknesses of the F-35 and how to wage air warfare in a manner to best exploit those weaknesses. Expect the F-35 to be forced to dogfight when it is employed in real warfare against an intelligent, well-equipped and determined enemy.