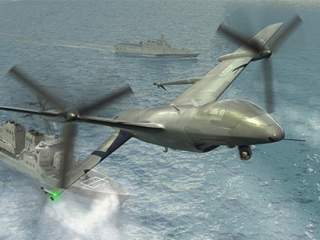 The U.S. Navy will need to develop a new ship-based medium-altitude unmanned aircraft to properly implement its distributed lethality concept.

Under the Navy’s concept, firepower—like long-range land attack cruise missiles and other weapons—would be distributed to many more types of ships. But in order for the concept to work, the ships will need targeting data from extended ranges—especially if enemy forces deny the fleet access to space. That data could come from a revolutionary new drone.

McGrath cited the Defense Advance Research Project Agency’s Tactically Exploited Reconnaissance Node (TERN) program as a potential model. The TERN program is aimed at making it faster, quicker and cheaper for the Pentagon to deploy persistent strike and intelligence, surveillance and reconnaissance (ISR) capabilities almost anywhere in the world. In effect, the DARPA effort “seeks to combine the strengths of both land- and sea-based approaches to supporting airborne assets,” reads DARPA’s description of the program. “Tern envisions using smaller ships as mobile launch and recovery sites for medium-altitude long-endurance (MALE) unmanned aircraft (UAVs).”

If the TERN program bears fruit, it would allow ships—possibly the size of a destroyer or frigate—to launch and recover an unmanned combat aircraft without extensive modifications. “It would provide small ships with a ‘mission truck’ that could transport ISR and strike payloads to very long distances from the host vessel,” McGrath said. “The solution would support field-interchangeable mission packages for both overland and maritime missions. It would operate from multiple ship types and in elevated sea states.”

The Navy needs something like the TERN, because an enemy like China or Russia will attack the satellites and datalinks that form the sinews of American military power. “If conflict results in the reduction of satellite communications and networking, ships operating distant from the carrier strike group will need the ability to generate these capabilities organically,” McGrath said.

Moreover, the Navy could use an aircraft like TERN to replace the current modestly stealthy, reconnaissance-oriented Unmanned Carrier Launched Airborne Surveillance and Strike (UCLASS) requirement. With the intelligence gathering role offloaded to the surface warship fleet, the carrier and its air wing could concentrate on long-range strike inside heavily defended airspace. “Of additional interest is the possibility that a surface combatant based MALE UAV could assume some or all of the UCLASS ISR requirement currently being debated for employment from the aircraft carrier, so that the carrier air wing would then be left to concentrate on the contested strike requirement that exists in UCLASS,” McGrath said.