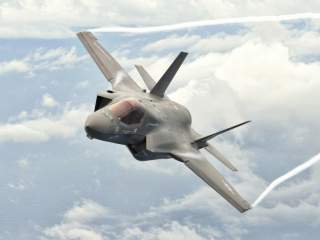 The Middle Eastern state has already agreed to buy thirty-three conventional takeoff F-35A model aircraft, but it now wants to buy the short takeoff/vertical landing F-35B variant in case its airfields are damaged during a surprise attack, reports Walla—a Hebrew-language daily. While the report did not disclose how many F-35B jump-jets might be purchased, under the current contract, Israel has the option to buy seventeen more jets.

The F-35B adds short takeoff and vertical landing capability so that it can operate from strips as short as 800 feet. But the F-35B sacrifices range, payload and maneuverability to achieve those aims. Its airframe is limited to 7G, a maximum speed of 630 knots at low altitude and a mission radius of 450 nautical miles—a drop of about 150 nautical miles. It can also only carry two 1,000lbs satellite guided bombs and two AIM-120 AMRAAMs internally, versus the two 2,000lbs weapons the other two versions can carry.

The addition of the F-35B variant—which is currently operational with the U.S. Marine Corps—would also allow Israeli forces to disperse their aircraft to remote locations. Given Israel’s small landmass, dispersing its forces is a logical move because fixed bases can easily be targeted and destroyed—especially as a new generation of low-cost precision weapons begins to proliferate.

While Israel has plenty of state actors like Iran in its neighborhood that might eventually have the capacity to knock out its airfields with precision weapons, a primary concern is instead that a group like Hezbollah might acquire such implements. Indeed, during the 2006 war in Lebanon, the terror group’s sophisticated tactics and use of advanced equipment surprised Israeli forces. Hezbollah fighters were equipped with body armor, night-vision goggles, advanced communications equipment and even advanced Russian-built anti-tank missiles—which damaged (and sometimes destroyed) more than fifty tanks. An Israeli navy ship—Hanit—was even damaged by a Hezbollah-launched Chinese C-802 anti-ship missile. As such, Israel is preparing for a hybrid war.

The U.S. Marines have explored a number of distributed operations concepts for the F-35B which Israel could leverage. Under one Marine Corps concept, a package of F-35Bs and MV-22 would move ashore. A number of F-35B fighters—probably groups of six—would be based at multiple austere airfields. MV-22 Osprey tilt-rotors would support the jets with cargo hauls, aerial refueling and, potentially, airborne early warning—if a new roll-on/roll-off radar is added. The jets would move every few days to complicate enemies' targeting ability.

While the Marines' experience might be beneficial to Israel, the IDF would likely have to develop much of its own concepts for operating the new F-35B. As a land-based power with very different requirements, the Israeli air force has different goals from that of the Marines. But Israel would nonetheless have a good starting point in levering the Marine Corps’ jump-jet expertise to date.