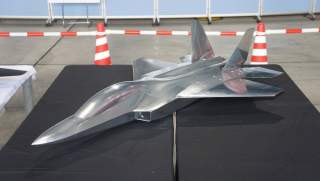 Mitsubishi’s X-2 stealth demonstrator jet took off on the morning of April 22, propelling Japan into the stealth age. Designed to test new technologies, chief among them low observability, the X-2 marks Japan’s entry into an exclusive club shared by only a handful of nations.

Years from now, the aircraft could also evolve into a frontline stealth fighter as Tokyo aims for a technological leap past China — which can count on superior numbers of warplanes in any future conflict.

Previously called the Advanced Technology Demonstrator-X (ATD-X), X-2 took off from Nagoya Airport and flew for 26 minutes to the Japan Air Self-Defense Force base in Gifu. Japan’s Ministry of Defense unveiled the X-2 on Jan. 28.

Overseeing the project is the Acquisition, Technology and Logistics Agency, or ATLA, a branch of the Defense Ministry that incorporated the older Technical Research and Development Institute. Together with Mitsubishi Heavy Industries, they have overseen the aircraft’s development since 2009.

During its flight, the X-2 tested takeoff and landing as well as basic maneuvers, according to a press release from MHI. Speaking with War Is Boring via email, Hirofumi Doi, ATLA’s future fighter project manager, described the flight as “perfect.” The test pilot agreed, calling it “extremely stable.”

“Control of the aircraft went exactly as in our simulated training sessions,” he said in the MHI press release, “and after piloting the aircraft I’m 100 percent positive the X-2 is magnificent and will meet the Ministry of Defense’s requirements.”

In the following months, the ministry will test various technologies aboard the X-2, among them 3D thrust vectoring, fly-by-fiber optics, advanced radars and embedded skin sensors. More than just a test bed, the X-2 could lay the foundation for Japan’s future stealth fighter, the F-3.

But Japan faces a struggle to combine new technologies with a stealth design. By 2018, the MOD will decide whether to build a front-line stealth fighter based on the X-2 tests.

“X-2 gives us an experience of stealth airframe and engine integration only,” Doi said. “What we have to overcome will be the integration of complicated avionics system and advanced weapons into these stealth airframes. We have been working on a dozen of separate research projects, which include sensors, EW [electronic warfare], data links, fire control, heat management, etc.”

“However, the integration of these technologies will not take place until the development program starts.”

Unarmed and lacking sensors, the plane is 14.2 meters long and carries two new Ishikawa Heavy Industries XF5–1 low-bypass turbofans for power. Compared to other frontline and prototype stealth fighters, the X-2 lacks size but a frontline version will be larger. Each engine generates 5,000 kilograms of thrust and has a thrust-to-weight ratio comparable to the Snecma M88–2 engine powering France’s Dassault Rafale, according to an MOD report.

For now, the engines use a paddle system for 3D thrust vectoring maneuvers, but later versions of the engine could feature an axis-symmetric thrust-vectoring nozzle. ATLA started a research project in 2012 to develop a 33,000-pound-thrust engine, which would incorporate an axis-symmetric nozzle after development, Doi explained.

Lockheed Martin’s stealth programs clearly influenced the X-2’s design, owing to its lines which resemble the F-22. Mitsubishi, Japan’s only aircraft maker able to develop stealth aircraft, will also assemble Japan’s F-35s. While Lockheed builds four of the fighters at its Fort Worth plant, Mitsubishi is assembling the fifth plane at its Komaki Minami plant.

Overall, Japan will assemble 38 F-35s of the 42 ordered. Mitsubishi’s cooperation with Lockheed could provide more insight into stealth technologies, aiding the X-2’s development, but the Japanese government denies such help. The U.S. has not publicly agreed to share the F-35’s stealth technologies.

Much like the F-35, delays plague the X-2 project. Originally, Japan’s demonstrator was supposed to fly in late 2014, but developers pushed back the date to late 2015, and the plane ultimately flew last week. Engine troubles, among other issues, kept the plane grounded.

The XF5–1 engines’ control software suffered from automatic engine restart issues, according to James Simpson, a freelance journalist based in Japan. [Editor’s note: Simpson is a War Is Boring contributor.] Doi corroborated these claims, adding that the problems were resolved before taxi trials.

The most important question is whether the X-2 will lead to a future Japanese fifth-generation fighter. At ￥39 billion ($331 million), the project’s price tag could pose problems. Tokyo’s last fighter project also proved more expensive than anticipated.

The Mitsubishi F-2 was Japan’s last indigenous fighter plane. Based on Lockheed Martin’s F-16, the project’s prohibitive costs forced Japan to cut back its initial order of 144 to 94. F-4 Phantoms, Japan’s oldest frontline fighter, is being retired as we speak and the 2020s will see the retirement of both the F-2 and F-15J.

While the F-35 will begin taking over in the coming years, 42 planes cannot fill the gap … and the F-35 is no air-superiority fighter.

Back in the 1990s Japan realized the need to replace its fighter fleet and pursued the F-22. Congress dashed those hopes in 1998 with an export ban on the plane, and Japan finally gave up in 2010. Since then, Japan focused on the X-2 project, but expenses may thwart any real-life application.

However, Doi told War Is Boring ATLA “is preparing to develop [the F-3] alone or jointly.” Whether Lockheed Martin or another aerospace contractor will work alongside Mitsubishi, he did not say. Yet, sharing the work may be the only way a homegrown Japanese fifth-generation fighter will ever enter service.

With tensions between China and Japan straining with each passing day over both the Senkaku Islands and the East China Sea, Japan needs to maintain a technological edge, as it cannot match China in numbers. A November 2015 report by the Atlantic Council also emphasized the precariousness of Japan’s position in East Asia in the 2020s, when it’ll begin revamping the JASDF.

Japan will be a regional security leader, which “will require Japan to increase its capabilities to contribute to crises response in the region,” the report stated.

These capabilities include developing stealth technologies and other advanced sensors, given China’s advances in stealth aircraft. Already the U.S. has sent F-22s to the region as a show of strength against both China and Russia. But the United States cannot be Japan’s sole defender.

Over the next year, the X-2 will undergo more than 50 test flights, reports Flight Global, and then will Japan decide whether it’s ready to join the stealth fighter club.