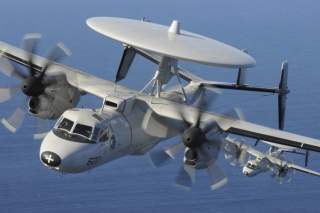 Japan’s purchase of the E-2D is significant because the capabilities of those two key features. The E-2D’s Lockheed Martin AN/APY-9 UHF-band radar is the central feature of the Advanced Hawkeye. Both friend and foe alike have touted UHF radars as an effective countermeasure to stealth technology. One early public example of that is a paper prepared by Arend Westra that appeared in the National Defense University’s Joint Forces Quarterly academic journal in the 4th quarter issue of 2009. “It is the physics of longer wavelength and resonance that enables VHF and UHF radar to detect stealth aircraft,” Westra wrote in his article titled Radar vs. Stealth.

UHF-band radars operate at frequencies between 300MHz and 1GHz, which results in wavelengths that are between 10 centimeters and one meter long. Typically, due to the physical characteristics of fighter-sized stealth aircraft, they must be optimized to defeat higher frequencies in the Ka, Ku, X, C and parts of the S-bands.

There is a resonance effect that occurs when a feature on an aircraft—such as a tail-fin tip— is less than eight times the size of a particular frequency wavelength. That omnidirectional resonance effect produces a “step change” in an aircraft’s radar cross-section. Effectively what that means is that small stealth aircraft that do not have the size or weight allowances for two feet or more of radar absorbent material coatings on every surface are forced to make trades as to which frequency bands they are optimized for.

That would include aircraft like the Chengdu J-20, Shenyang J-31, Sukhoi PAK-FA and indeed the United States’ own Lockheed Martin F-22 Raptor and tri-service F-35 Joint Strike Fighter. Only very large stealth aircraft without protruding empennage surfaces — like the Northrop Grumman B-2 Spirit or the forthcoming Long Range Strike-Bomber — can meet the requirement for geometrical optics regime scattering. Effectively, that means the E-2D’s AN/APY-9 radar can see stealth aircraft like the J-20 or J-31.

Pentagon and industry officials concede that low-frequency radars operating in the VHF and UHF bands can detect and even track low-observable aircraft—that’s just physics. But conventional wisdom has always held that such systems cannot generate a “weapons quality” track—or in other words, are unable to guide a missile onto a target. “Poor resolution in angle and range, however, has historically prevented these radars from providing accurate targeting and fire control,” Westra wrote.

However, electronic scanning and new signal processing techniques have mitigated those shortcomings to an extent. And there are other techniques in development, such as linking multiple low-frequency radars via high-speed datalinks, which might enable those radars to generate weapons quality tracks. But industry officials say those technologies are not ready for prime time.

Yet, the U.S. Navy and Lockheed may have already solved the problem. The service openly talks about the E-2D’s role as the central node of its NIFC-CA battle network to defeat enemy air and missile threats. Indeed, Rear Adm. Mike Manazir, the Navy’s director of air warfare, described the concept in detail to myself and my good friend Sam LaGrone at the U.S. Naval Institute just before Christmas in 2013.

For Japan, it is the E-2D’s ability to facilitate over-the-horizon missile shots against supersonic anti-ship missiles, stealthy low-level cruise missiles and theatre ballistic missiles that are of great interest given the growing threat from China and North Korea. The ability to nullify China’s investment in the Chengdu J-20 and J-31 is likely just an added bonus—especially if Japan upgrades its F-15 Eagles and other fighters to take advantage of NIFC-CA.

Indeed, there is a possibility Japan plans to do just that. According to a recent Sept. 25, 2015, story that appeared in the Yomiuri Shimbun—which is the ruling Liberal Democratic Party’s favored news outlet—Japan is building two Aegis destroyers installed with NIFC-CA. “The Defense Ministry will introduce NIFC-CA capable E-2D airborne early warning aircraft and also plans to install the latest information-sharing system that supports NIFC-CA on two Aegis ships now being built,” the Yomiuri Shimbun reported.

U.S. Navy and Defense Department officials said they would have to defer comment to the Japanese defense ministry. “It's up to the Japanese to decide if they want to discuss numbers and delivery dates,” a Naval Air Systems Command spokesman told me. Nor is manufacturer Northrop Grumman able to comment on the Japanese sale. However, I have learnt that Japan plans to buy four aircraft, which are likely to be delivered in 2019. The Pentagon had notified Congress of a potential sale to Japan of the Advanced Hawkeye earlier this year in June.