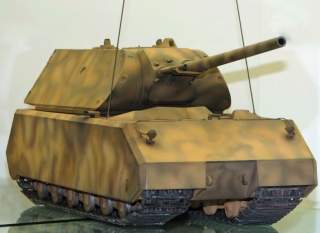 By the time the super-heavy Maus tank rolled out for its first tests in January 1944, the Nazis had — six months after Kursk — effectively lost the war. It was just a matter of time before the Allied armies would slog their way into the heart of Germany and finish them off.

Yet the Nazi regime pressed ahead with developing and propagandizing all manners of so-called “miracle weapons.” Almost until Germany’s capitulation, a belief that secret wonder weapons would emerge and force Britain and America to reach an armistice were widespread among German troops — no matter the actual effectiveness of such weapons when they existed.

The Panzerkampfwagen VIII Maus was one such weapon. It was impractical and also huge — so huge it holds the record for the heaviest fully-enclosed tank ever built. The Maus weighed 180 metric tons. That’s around three times heavier than the M-1 Abrams battle tank fielded by today’s U.S. Army and Marine Corps.

And it was all for nothing. The Maus (likely) never saw combat as the Soviets overran the Kummersdorf proving grounds on April 21, 1945, capturing Germany’s two prototypes. German surrendered less than three weeks later.

“It is a fact that destroyed tanks were found,” military historian Waldemar Trojca wrote in German Secret Panzer Projects. “However, what is not known is whether they were destroyed in combat or intentionally by the Germans.”

The Maus was heavy.

The Maus wasn’t even really a tank … it was a massive bunker with tracks.

It also did not have a traditional tank gun. Instead, the Maus packed a 15-centimeter howitzer specifically on Hitler’s orders. Although only one of the two prototypes ever produced had a turret. (The first used a concrete mock-up for weight testing.)

This design did not correspond with modern concepts of armored warfare, which emphasize blending a combination of a tank’s strengths — including speed — to blast through a defended position and wreak havoc behind the lines.

The Maus would have slowly lumbered toward the front line and forced its way through with sheer destructive power, opening a space for more maneuverable forces to pass through.

It’s a strained comparison, but the Islamic State’s practice of sending armor-encased suicide bomb trucks to blast through built-up defenses reflects a similar tactical philosophy. The Maus was a single-purpose weapon.

First proposed by automotive engineer Ferdinand Porsche in June 1942 to Hitler and German armaments minister Albert Speer, the Maus production plan envisioned a total of 152 tanks. But it was a tall order. By the middle of the war, steel and critical alloys were in high demand elsewhere in the German war industry.

Another engineering challenge centered on the engines. Porsche went through several design changes before settling on an MB 517 Mercedes-Benz diesel engine for the second prototype. However, the engine failed during its first trial due to a broken crankshaft.

Was it useless? Not exactly. Trojca noted that test drivers found the Maus easy to steer — which might seem counter-intuitive in such a beastly machine. And it was certainly fearsome in its own right.

But by 1944, the concept of a super-heavy tank for offensive breakthroughs was senseless, as medium tanks which balanced firepower with flexibility emerged to set the standard for fighting vehicles to the present.