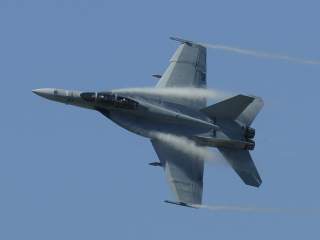 The Pentagon’s Defense Advanced Research Projects Agency (DARPA) is working on a new generation of electronic warfare systems that are based on artificial intelligence (A.I.). If the program were to prove a success, the new A.I.-driven systems would provide the United States military a way to counter evermore-capable Russian and Chinese radars.

“One of our programs at DARPA is taking a whole new approach to this problem, this is an effort we refer to as cognitive electronic warfare,” DARPA director, Dr. Arati Prabhakar, told the House Armed Services Committee’s Subcommittee on Emerging Threats and Capabilities on February 24. “We’re using artificial intelligence to learn in real-time what the adversaries’ radar is doing and then on-the-fly create a new jamming profile. That whole process of sensing, learning and adapting is going on continually.”

Current generation aircraft—including the stealthy Lockheed Martin F-22 and F-35—have a preprogrammed databank of enemy radar signals and jamming profiles stored in a threat library. But if those warplanes encounter a signal that has not previously been encountered, the system registers the threat as unknown—which means the aircraft is vulnerable to that threat.

“Today, when out aircraft go out on their missions, they’re loaded up with a set of jamming profiles—these are specific frequencies and waveforms that they can transmit in order to jam and disrupt an adversaries’ radar to protect themselves,” Prabhakar said. “Sometimes when they go out today, they encounter a new kind of frequency or different waveform—one that they’re not programmed for, that’s not in their library, and in a time of conflict, that would leave them exposed.”

During peacetime, the Pentagon usually deploys a signals intelligence aircraft like the RC-135V/W Rivet Joint to collect data on a new waveform. That data is then sent to a laboratory to be analyzed so that a new jamming profile can be created. Those new jamming profiles are then incorporated into a jet’s—F-22, F-35, F/A-18 or any other fighter—operational flight program updates. “Eventually, months—sometimes years—later our aircraft finally get the protection that they need against this new kind of radar signal,” Prabhakar said.

In the years prior to the digital revolution when radar waveforms were rarely altered, that slow process might have been adequate. In the current era where a new waveform can be created very quickly with minor software tweaks, the current process leaves American forces vulnerable. “That slow moving world is now gone,” Prabhakar said. “It’s not that hard to modify a radar system today. If you think about, the same technologies that have brought communications and the Internet to billions of people around the world, those are the same technologies that people are now using to modify radars.”

It’s a problem that has cropped up in many different regions around the world, Pabhakar said. Right now, the only U.S. combat aircraft that have some capacity to analyze enemy waveforms in real time are the Northrop Grumman EA-6B Prowler—which is still serving with the Marines—and the Navy’s Boeing EA-18G Growler. While both the Growler and Prowler have pre-programmed onboard threat libraries, both jets carry electronic warfare officers (EWO). Those EWOs can recognize and analyze the unknown enemy waveforms and—based on their experience—figure out a way to jam them in real time to an extent. However, it’s far from perfect because it relies purely on the skills of an individual EWO.

If DARPA’s new A.I.-based electronic warfare system works, it would save the Pentagon time, money and potentially even save the lives of aircrew if they encounter a new enemy surface-to-air missile system or fighter radar. “So what all of that means is that our aircraft in the future won’t have to wait weeks, months to years, but in real time, in the battlespace, they’ll be able to adapt and jam this new radar threat that they get.”