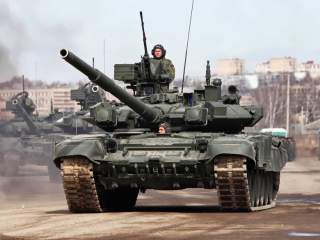 A new RAND Corporation study suggests that Russian forces could overrun NATO’s Baltic states in less than three days. Moreover, if Moscow chose to mount an invasion of Estonia, Latvia and Lithuania, the United States and NATO would not have any good options with which to respond.

RAND came to its “unambiguous” conclusion after a series of wargames it conducted between the middle of 2014 and early 2015. “As currently postured, NATO cannot successfully defend the territory of its most exposed members,” reads the study. “Across multiple games using a wide range of expert participants in and out of uniform playing both sides, the longest it has taken Russian forces to reach the outskirts of the Estonian and/or Latvian capitals of Tallinn and Riga, respectively, is 60 hours.”

Moreover, the RAND wargamers playing the “Blue” NATO side found that they had no good options:

“Such a rapid defeat would leave NATO with a limited number of options, all bad: a bloody counteroffensive, fraught with escalatory risk, to liberate the Baltics; to escalate itself, as it threatened to do to avert defeat during the Cold War; or to concede at least temporary defeat, with uncertain but predictably disastrous consequences for the Alliance and, not incidentally, the people of the Baltics.”

RAND did, however, developed a few recommendations that should make an invasion much more difficult for Moscow—should it be inclined to attack the Baltic states. “Further gaming indicates that a force of about seven brigades, including three  heavy armored brigades—adequately supported by airpower, land-based fires, and other enablers on the ground and ready to fight at the onset of hostilities—could suffice to prevent the rapid overrun of the Baltic states,” the RAND report reads.

“While not sufficient to mount a sustained defense of the region or to achieve NATO’s ultimate end state of restoring its members’ territorial integrity, such a posture would fundamentally change the strategic picture as seen from Moscow. Instead of being able to confront NATO with a stunning coup de main that cornered it as described above, an attack on the Baltics would instead trigger a prolonged and serious war between Russia and a materially far wealthier and more powerful coalition, a war Moscow must fear it would be likely to lose,” the report continued.

While light infantry forces might slow down Russian forces, heavy armored vehicles like the M1A2 Abrams main battle tank and Bradley fighting vehicle would be the key to defending those countries. But the United States—and other NATO allies such as Germany—have reduced their armored forces in Europe to paltry levels. What forces do remain in theatre would take far too long to arrive.

“Quality light forces, like the U.S. airborne infantry that the NATO players typically deployed into Riga and Tallinn, can put up stout resistance when dug into urban terrain. But the cost of mounting such a defense to the city and its residents is typically very high, as the residents of Grozny learned at the hands of the Russian Army in 1999–2000. Furthermore, these forces likely could not be resupplied or relieved before being overwhelmed.” the RAND report notes. “What cannot get there in time," the report adds, "are the kinds of armored forces required to engage their Russian counterparts on equal terms, delay their advance, expose them to more-frequent and more-effective attacks from air- and land-based fires, and subject them to spoiling counterattacks.”

The solution is not only to preposition armor, but also to develop a coordinated doctrine of when and how to use those deployed forces. “A successful defense of the Baltics will call for a degree of air-ground synergy whose intimacy and sophistication recalls the U.S. Army–U.S. Air Force ‘AirLand Battle’ doctrine of the 1980s,” the RAND study reads.

One thing to note, however—the RAND wargames did not fully incorporate the potential use of nuclear weapons. “We did not portray nuclear use in any of our games, although we did explore the effects of various kinds of constraints on each side’s operations intended to represent limitations that might be imposed by national or alliance political leaderships anxious to avoid setting off escalatory spirals,” the report's authors write.

The wargames also make critical assumptions about the escalation cycle: “NATO could take steps to seek to limit escalatory pressures—by assuring Russia that any strikes on Russian soil would be geographically limited and constrained to a small set of very specific targets and by guaranteeing that no ground maneuver forces would enter Russian territory. It would, of course, be up to Moscow to decide how much credence to grant such guarantees,” the study's authors conclude.

In all, the report puts the figure for fielding seven brigades to deter potential Russian aggression at about $2.7 billion.

Dave Majumdar is the defense editor for the National Interest. You can follow him on Twitter: @DaveMajumdar.