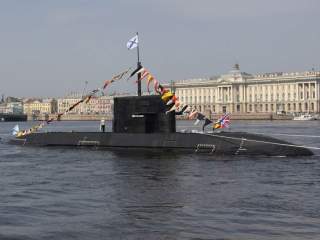 Russia is set to start construction of its new Kalina-class diesel-electric submarine after the last two Lada-class vessels are completed. The Project 677 Lada-class—which Moscow is terminating after three units are completed—has proven to be a disappointment.

“The two Lada-class Project 677 submarines will be delivered as scheduled — in 2018 and 2019,” a spokesman for United Shipbuilding Corporation told RIA Novosti. “Then the construction of the new non-nuclear Kalina-class submarines will be launched.”

Not much is known about the Kalina-class except that Moscow intends to equip the new vessels with an air independent propulsion (AIP) system. Russia’s current Kilo and sole Lada-class vessels do not currently incorporate an AIP—which has already become standard on Western diesel boats.

Moscow had planned to equip the Lada-class with an AIP, but those plans seem to have been dropped. The TASS new agency notes that while Russia has been working on an AIP for years, plans to equip the Lada with the new system have come to naught.

Moscow now appears not to have plans to refit Sankt Peterburg—the first Project 677 vessel—with an AIP, which has been in service since 2010. Nor does it appear that the two remaining Ladas will be equipped with an AIP.

Instead, it seems that Moscow is cutting its losses and moving onto the Kalina as it expands its undersea capabilities.

Earlier this year, Royal Navy Vice Adm. Clive Johnstone said that NATO submarines are seeing “more activity from Russian submarines than we've seen since the days of the Cold War.” And recently a Russian ballistic missile submarine was spotted off the coast of France.