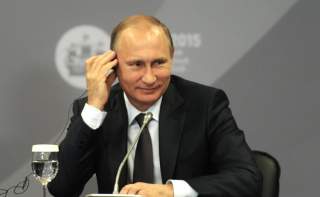 From 1961 to 1992, one of Moscow’s most prestigious schools bore the name of Patrice Lumumba, the Soviet-supported Congolese independence leader brutally executed in 1961. Patrice Lumumba University recruited and educated generations of foreign leaders, especially African leaders, and was just one of the many ways in which the Soviet Union cultivated ties with Africa. Then with the fall of the Soviet Union, after years of pouring money, arms, and manpower into left-leaning anticolonial movements, Russia’s presence in Africa, and Lumumba University, nearly disappeared overnight. But today, two decades later, Russia is once again working to establish a foothold on the continent.

Russia’s interests in Africa are manifold. As economic sanctions constrict its trade with the West, Africa is becoming an increasingly attractive investment opportunity. At the same time, Africa’s fifty-four countries represent a political opportunity to relieve Russia’s isolation and build support for its actions in the UN. Finally, Russia’s prominence in Africa lends credibility to its reassertion of world power status. The effectiveness of Russia’s re-engagement policy is still in question, but its progress is becoming increasingly difficult to ignore.

According to the Atlantic Center’s Africa Center Director J. Peter Pham, between 2000 and 2012, Russia’s trade with Africa increased ten times over. Russia has invested heavily in raw resource megaprojects, signing a $4 billion deal with Uganda in February to build and operate a crude oil refinery and $3 billion deal with Zimbabwe to develop a platinum mine.

Some of its trade has been more overtly political. Russia is a major supplier of arms to both North and sub-Saharan Africa. Russian arms are an increasingly popular alternative to U.S. weaponry, which still dominates the market despite higher monetary and political costs. When the United States rejected a Nigerian request for Cobra attack helicopters in 2014 for instance, Nigeria responded by cancelling a U.S. military training program to fight Boko Haram and investing in Russian aircraft. Now, Russia trains Nigerian Special Forces. The true extent of Russian security deals is difficult to measure because their opaqueness. In at least one case, an African country’s civilian intelligence agency was forced to spy on its own military counterpart and Russia just to figure out what kind of surveillance system they had purchased for $100 million.

There are still some transparent indicators of Russian military presence in Africa that speak to the scale of Russia’s commitment. As Pham has noted, Russian soldiers involved in peacekeeping operations in Africa surpass those of France, the United Kingdom, and the United States combined.

Russia’s outreach goes further than financial and military bonds. Russian leaders visiting Africa capitalize on a narrative that emphasizes their historical support for African independence. At a time when the United States designated Nelson Mandela a terrorist for fear of his socialist sympathies, the Soviet Union actively trained and armed the African National Congress, now the ruling party of South Africa, to fight apartheid. Soviet support helped fuel liberation struggles across Africa. At the same time, Russia today pays little attention to undemocratic practices and human rights abuses that often hinder U.S. efforts on the continent. This strategy of combining historical moralism with present-day moral relativism has had some limited success. Although the UN General Assembly voted to condemn Russian intervention in Ukraine by a large margin, two of the ten countries that voted with Russia were African, while a large portion of the rest of Africa abstained.

Despite formidable investments in Africa, Russia is still eclipsed by the United States, the United Kingdom, France, and China. Unlike those countries however, Russia’s own abundance of natural resources may convince it to focus more on exporting arms. These weapons seem as likely to enforce stability and repress militants, as they are to fall into the wrong hands and spread instability. Russia’s deteriorating economic situation, and more pressing concerns on its borders, may mean the current relationship won’t be sustainable. Nevertheless, the current trend seems toward greater involvement, which makes Russia an important player in any long-term view of U.S. policy in Africa.