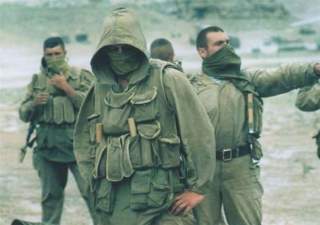 When it comes to wars, nations like to have insurance policies in case things go bad. Russia isn’t an exception. The Kremlin’s ground-attack planes in Syria are not there by themselves, but have cover from high-tech fighter jets in case anyone, namely the United States, tries to challenge the Russian air force.

But Russia has another and far more shadowy insurance policy in Syria. To enact that policy, Russia can call on agents with Zaslon, or “Screen,” an ultra-secret group of special operatives long rumored to operate in the country.

Like their American counterparts, the public glamorizes Russia’s various “Spetsnaz” units, which are often willing to play along with the portrayals. But Zaslon doesn’t do that, as it doesn’t officially exist.

But evidence for Zaslon’s presence in Syria grew stronger with the recent publication of a new (paywalled) article by authors Mark Galeotti and Jonathan Spyer in Jane’s Intelligence Review. Galoetti, a professor at New York University and an expert on Russian special operations forces, wrote the section on Zaslon and excerpted it on his blog.

Zaslon, which operates under the Kremlin’s Foreign Intelligence Service, conduct its affairs in Syria separately from the Main Intelligence Directorate, or GRU. While GRU agents work in the Syrian defense ministry in Damascus, Zaslon is a “small special forces team … reporting neither to the GRU or to regular military cells, but instead to the Russian embassy on Omar Ben Al Khattab Street,” Galeotti wrote.

What does Zaslon do? It could be serving in an advisory role to Syrian military and government officials, in addition to feeding intelligence back to Moscow. But another job could be—in the event of a regime breakdown—to protect, rescue or seize Russian nationals, assets and intelligence documents in the country.

Or whatever else needs doing.

The last time I heard with any confidence of Zaslon being deployed (other than a few individuals in extreme diplomatic protection missions) was to Baghdad in the final days of Saddam Hussein’s dictatorship. Then, their role was to secure (retrieve or destroy) particular documents, military tech and whatever else Moscow wanted to ensure did not end up in American hands. It could be that, as higher tech Russian kit begins to bolster the regime’s capabilities, Zaslon is being deployed again as a precautionary measure.

You know, just in case.

Robert Beckhusen is the managing editor of War Is Boring.

Editor’s Note: This post originally appeared on War Is Boring. You can find it here.