Revealed: The Devastating Aftermath of a Nuclear Attack on Manhattan 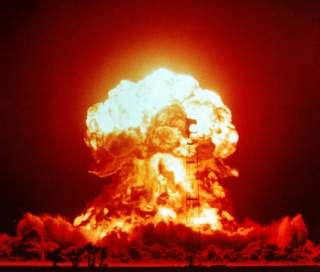 My generation doesn't think much about nuclear weapons, disarmament and the consequences of nuclear-weapons use. Some certainly do, but generally, the cause of nuclear disarmament is being carried on by an older generation.

I think that's a problem. Nuclear weapons seems like an old issue, from a previous generation and time. Plus, we have our own causes and as the argument often goes, 'no one is ever going to use one anyways, right?' This never convinces me, for a variety of reasons, but I also think we just haven't lived in a time when geopolitical tensions were such that two nuclear armed powers were close to war (except perhaps India and Pakistan in 1999, and the growing nuclear dimension of the tensions between Russia and the West today).

There is also the fact that the immediate and full effect of a military-grade nuclear weapon hasn't really been represented in pop culture since the end of the Cold War. For example, films since 9/11 have only depicted explosions from small nuclear weapons, usually orchestrated by terrorists like in the film The Sum of All Fears, but also in The Dark Knight Rises and to a lesser extent The Peacemaker. The point is that younger generations have never really been exposed, even fictionally, to the dangers of nuclear war. Some films do deal with this, like Crimson Tide (great film, but nuclear war is averted, yet again) and Independence Day (the nuclear explosion is not depicted, and it fails to stop the aliens, except later in space with the help of Jeff Goldblum).

In short, my generation has never had its version of The Day After.

That's why an article from 2004, recently republished by the Bulletin of Atomic Scientists (h/t The Browser), grabbed my attention. The article is adapted from Lynn Eden's 2004 book Whole World on Fire, which essentially argues that US military planners have consistently underestimated the destructive effects of nuclear weapons by only calculating their blast damage, and not the additional damage caused by fire and firestorms.

It is worth quoting Eden describing the results of an 800 kiloton nuclear warhead detonating over Manhattan, which she does to terrifying effect. First, the temperature of the detonation itself:

...After one second, the fireball would be roughly a mile in diameter. It would have cooled from its initial temperature of many millions of degrees to about 16,000 degrees Fahrenheit, roughly 4,000 degrees hotter than the surface of the sun.

Eden then describes the destruction the heat would cause downtown:

At the Empire State Building, Grand Central Station, the Chrysler Building, and St. Patrick's Cathedral, about one half to three quarters of a mile from ground zero, light from the fireball would melt asphalt in the streets, burn paint off walls, and melt metal surfaces within a half second of the detonation...

...Those who tried to escape through the streets would have been incinerated by the hurricane-force winds filled with firebrands and flames. Even those able to find shelter in the lower-level sub-basements of massive buildings would likely suffocate from fire-generated gases or be cooked alive as their shelters heated to oven-like conditions.

And then the fires that would engulf the city and the surrounding suburbs:

On a clear day with average weather conditions, the enormous heat and light from the fireball would almost instantly ignite fires over a total area of about 100 square miles...

...As the massive winds drove flames into areas where fires had not yet fully developed,the fires set by the detonation would begin to merge. Within tens of minutes of the detonation, fires from near and far would join to form a single, gigantic fire. The energy released by this mass fire would be 15 to 50 times greater than the energy produced by the nuclear detonation...

...These superheated ground winds of more than hurricane force would further intensify the fire. At the edge of the fire zone, the winds would be powerful enough to uproot trees three feet in diameter and suck people from outside the fire into it.

The destructive power of nuclear weapons is imaginable, real and frightening. Even though recent set-backs have slowed down the momentum for nuclear disarmament, it's critical that it at least remains a visible part of the global agenda.

Brendan Thomas-Noone is a Research Associate in the International Security Program and the Digital Editorial Assistant at the Lowy Institute.This article first appeared on the Lowy Interpreter, here.