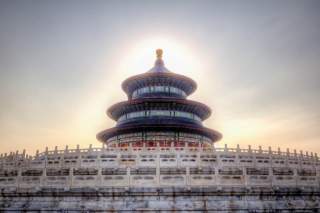 Growth is certainly slower and its structure is changing, but is the outlook for China's economy quite as awful as global share markets seem to think?

Now the world's biggest economy (using the IMF's purchasing power parity measure), China matters vastly more for world markets than it did a decade ago, when it was less than half the size. It matters particularly to Australia, which in a decade has seen exports to China increase from one tenth of Australian goods exports to nearly one third.

The most dramatic recent slowdown sign was two weeks ago in China's manufacturing purchasing index. It was a little weaker than the market expected, sparking a global share sell off. But here's the problem: weakness in manufacturing output is exactly where we should expect to see weakness, if China is indeed making its long announced transition from exports, investment and heavy industry to consumption and services.

It was supposed to happen, and for a while it didn't. And now that it is happening markets don't know what to make of it.

The evidence of the transition accumulates, and it looks similar to the evidence for a general slowdown in China. Indeed it is identical, because slowing output growth is also part of the transition. Exports have slowed, for example. Steel production growth has slowed to zero, at least in the most recent reports, and most indicators of residential construction – prices, floor space sold – are very much weaker than they were a few years back. The current account surplus has dramatically narrowed (though now widening a little). Savings has fallen as a share of GDP, as has investment.

It's complicated because while China is making a transition from exports and investment to consumption and services, it has also been making a transition away from an unsustainable boom in infrastructure and home building. Both were boosted in the aftermath of the GFC seven years ago, both were stimulated by expanded lending, and both are now running at much lower levels than they were five years ago. Credit growth is well down, as intended.

In 2010 China's output growth reached 10.6%. In the year to June 2015 it was down to 7%. That's a big decline, though it's interesting that after a sharp deceleration in 2012 to 7.7%, the subsequent slowdown has been fairly mild. The overall growth rate of output or GDP hasn't changed quite as much as the violent reaction of markets would suggest. And while it's true that manufacturing output indicators are soft and exports are slow, in recent months there have been plausible signs that the decline in housing construction is bottoming out, and a little strength is returning to residential sales and prices.

It may not quite make it, but at this point one can't rule out that China will expand GDP by around 7% this year, the planners target. If it came in at 6.8%, still the IMF forecast, that would be near enough and a very satisfactory outcome for the rest of the world.

If China is indeed making the transition it has long said it wishes to make, it would look like what we are now seeing. Both the IMF and the World Bank have in recent months pointed to compelling evidence that the transition is well under way, and it's one of which they heartily approve. It's remarkable that last year consumption growth in China contributed more to GDP growth than did the growth of investment. Remarkable, too, that half of the overall growth of output was contributed by services rather than by heavy industry. As a result, employment has held up well despite declining output growth, because service industries are big employers.

So the evidence the market observes as signs that the world's biggest economy is collapsing are the same signs it would observe if China is successfully making the transition President Xi has affirmed as the policy of the Party leadership. It is a policy blessed by the IMF and the World Bank. That makes it hard for global markets, which are already jittery about the forthcoming tightening by the US Federal Reserve.

The interpretive problem is much the same for China's exchange rate policy.

The manufacturing index shock followed the much greater shock of China's sudden 3% currency depreciation in mid-August. Share markets everywhere plummeted, and in China most of all. But surely the most remarkable aspect of China's conduct on the exchange rate was not that it suddenly depreciated in August, but that it hadn't done so sooner, and had for so long kept pegging against a US dollar rising against most of the rest of the world. Since 2005, the Chinese yuan has appreciated by 55% in real trade weighted terms, to the point where earlier this year the IMF declared that it was 'no longer undervalued'. For those who remember the exchange rate debates not so long ago, this is astonishing.

China has appreciated substantially against its regional competitors Korea and Japan, a particularly painful move. The 16% real appreciation over the last year, as China kept pace with a US dollar rising against the rest of the world, was evidently beginning to bother Chinese leaders. It would have been particularly concerning as the US Federal Reserve approaches its first increase in the policy rate, which may well see the US dollar rising further. In depreciating, the People's Bank of China (PBOC) signaled that it would not necessarily go along with further US dollar appreciation.

This too is an aspect of a long-announced transition, far from completion, and in this case from a highly regulated financial system with quantitative controls on money and credit and a fixed exchange rate. While the depreciation itself was startling, there has been less attention to the long appreciation which preceded it and to more subtle, but more important, enhancement of the currency's flexibility that was introduced at the same time. Up to mid August, the PBOC fixed the exchange rate every day and the market followed. Now the market sets the rate, and the following day's PBOC fix is the rate previously reached by the market. There is a still a trading band, above or below which the market rate is not allowed to stray. The PBOC has been intervening quite a lot in recent weeks as China tries to stabilise the rate. Even so, China is now closer than it was before to the goal of a free float exchange rate (though still quite a long way away).

Part of the market's confusion on China's exchange rate policy was that in running down reserves in recent times, the PBOC gave the appearance of driving the exchange rate higher. Though it had that effect, what the PBOC actually appears to be doing is providing the foreign currency to enable Chinese businesses and households to buy foreign assets. China is thus moving a little closer towards an open capital account. Chinese households and businesses are acquiring foreign assets, and the PBOC is disposing of them. Effectively it's a transaction within China, with the PBOC providing the US dollars and other foreign currencies in exchange for yuan to allow the private purchase of assets abroad. The net gain in foreign assets is equal to the current account surplus. What we are observing is what we should be seeing if China is moving towards a more flexible exchange rate and a more open capital account.

China's growth slowdown has been underway now for five years, and has many more years to run. Despite market nervousness, the slowdown in China has not had a big impact on the rest of the world. Growth in the US has picked up over the period, and so has growth in Japan. Germany, a major supplier of machine tools to China, is expanding. Growth in Asian economies other than Japan is running around trend, or not much below it.

Of all economies, Australia is one of those most directly affected by China's slowdown. But even in Australia the effect has so far been milder than might have been thought.

As we have known for quite a while, the slowdown in China's industrial growth limits the increase in the quantity of Australia's iron ore and coal exports. At the same time the increase in global supply has driven down the prices of these resources. No surprises there. If there is anything unexpected it's that the volume of Australian iron ore exports has been growing more strongly than China's industrial production. This is because much of Australia's iron ore can be produced at the cheapest end of the cost curve, so to some extent displaces other producers – notably Chinese producers – who are at the expensive end of the curve. The other reason is that in the first instance the transition to more reliance on household demand takes the form of building high rise apartments. These need a lot of steel. So while there has been a big fall in price, the quantity of Australian iron ore exported to China has dramatically increased.