Revealed: The U.S. Air Force Wants Drones that Can Refuel Other Drones in Midair 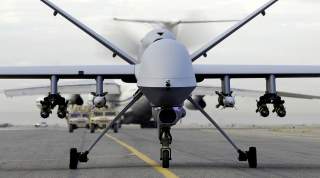 The U.S. Air Force wants drones that can be refueled in midair by other drones.

The reason is simple. While drones like the RQ-4 Global Hawk can stay in the air for more than thirty hours without getting tired, bored or feeling the urge to urinate, even an unmanned aircraft needs to refuel sooner or later. That means the drone must interrupt its mission to return to base, or a manned tanker aircraft will have to fly to where the drone is to refuel it. But since the whole reason for robots is to keep humans out of harm’s way, sending a tanker and its fighter escorts into hostile airspace to top up a drone defeats the purpose.

So it’s just a matter of time before robot aircraft refuel other robot aircraft. The U.S. Navy has already demonstrated that its X-47B unmanned combat aircraft could be refueled by a manned tanker. The Navy is also developing an carrier-based unmanned tanker, the MQ-25A Stingray, to refuel manned carrier aircraft.

Now, a new Air Force research proposal is calling for drones to refuel drones. The proposal, titled “Aerial Refueling of UAVs” (see proposal AF171-125 here), is aimed at developing a better way for air-to-air refueling of Class 4 and Class 5 UAVs, which comprise the larger drones such as the Global Hawk and MQ-9 Reaper.

One way is to refuel drones the old-fashioned way, with manned tankers like the KC-135. Or, they can be refueled by other drones.

“In order to maximize potential on-station capability, it is desirable to minimize the distance the UAV must travel in order to reach the refueling orbit,” the Air Force says. “Since many military UAVs operate inside hostile territory, bringing a large manned tanker into this arena is problematic. Because of this, an unmanned, automated tanker could be a potential solution.”

Regardless of whether the flying gas station is manned or unmanned, refueling drones in flight presents special challenges. The Air Force cites five: the two aircraft have to avoid collisions, they have to know each other’s exact position if those collisions are to be avoided, the tanker or UAV must be able to react quickly if a problem arises, refueling must be possible at night and in bad weather, and the refueling hardware must be lightweight.

Unmanned aircraft also tend to a fly bit slower than their piloted counterparts. While manned aircraft might refuel at a speed of around 250 knots, the Air Force wants a system that can refuel drones flying at a maximum speed of 130 knots.

“For this effort, offerors should consider both the tanker and UAV for how a potential refueling system will work,” the Air Force says. “One element of the problem is for the system to be applicable to unmanned refueling aircraft, rather than existing manned tankers (e.g. KC-135). Offerors should also consider automation of probe/drogue deployment and retraction, coordination between unmanned systems (cooperative control), and possible influence (flight dynamics or other) of a smaller tanker aircraft, if any.”

As long-endurance drones become more numerous, they will tax scare manned tanker resources. So delegating refueling to other drones makes sense. How will the technology will work remains to be seen. Can drones reliably refuel drones if their links with ground control are spotty? Can unmanned aircraft consistently conduct refueling operations autonomously, relying on their own onboard software? If the concept works, drones will become take on an even more prominent role over the battlefield.