Revealed: The U.S. Army Has a Bunch of Fake Russian Tanks 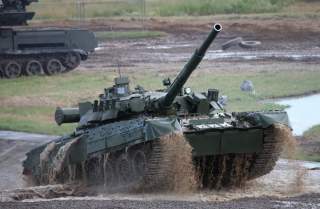 When soldiers from the U.S. Army’s 11th Armored Cavalry Regiment take the field at the National Training Center in California, their job is generally to play one of the enemy during war games.

To help complete their new look, the troops operate a whole bunch of Russian-looking tanks and other armored vehicles.

Like many armies around the world, the U.S. Army has long held that making training as realistic as possible gives troops the best chance in real combat. Specially trained “opposing forces” such as the 11th ensure that practice sessions aren’t just two American units using the same tactics against each other.

Troops get “a lot of complex and tough challenges while they are here,” Army lieutenant colonel Jimmy Kimbrough, then the second-in-command of the regiment, told the service’s reporters in 2013. “They’ll make mistakes, but it’s better to make them here than in combat.”

After World War II, the ground combat branch began cooking up elaborate mock enemies to help troops practice against realistic opponents. Watching Israel battle its Arab neighbors in 1973, the Pentagon as a whole worried it might not be ready to fight a major land war against the Soviets or their allies.

In 1979, the Army responded by opening the National Training Center at Fort Irwin, around 100 miles northeast of Los Angeles. The sprawling desert environment gave troops the space to use tanks, howitzers and other heavy weapons in big, conventional exercises.

To give these events added weight, the Center got a number of captured Soviet vehicles, including at least one tracked MT-LB armored personnel carrier and a BTR-60 wheeled troop carrier. But there simply weren’t enough of these real examples to form large faux enemy units.

The ground combat branch built the first of these using old M-551 Sheridans. Designed with paratroopers and scouts in mind, these small tanks were light but heavily armed with an unusual and troublesome 152-millimeter combination gun- and missile-launcher.

With the exception of a single battalion off Sheridans in the 82nd Airborne Division, the Army rushed to replace the vehicles with new Bradley fighting vehicles or Humvees in the early 1980s.

But out in California, the tiny tanks got new life — with the help of numerous cosmetic add-ons — playing the role of Soviet T-80 tanks and BMP-1 personnel carriers. Technicians turned other vehicles into mocked up 2S3 self-propelled howitzers and ZSU-23-4 mobile anti-aircraft guns. In addition, a number of modified UH-1 Hueys played the role of iconic Soviet Mi-24 gunship helicopters.

On top of the ersatz Soviet armored vehicles, the Army fielded a special scoring system. Like souped-up laser tag, the emitters and receivers were tuned so that only appropriate weapons had a chance to “kill” tanks or troops.

“The effect is a greater level of realism than could be achieved with umpires ruling on the effects of engagements,” Lt. Col. John Warsinske from the Army Heritage and Education Center explained in a 2009 retrospective on the National Training Center.

Unfortunately, with the Sheridan out of production and largely out of service, troops had trouble keeping the VISMODs running. In 1998, the Army rolled out the first of its new Opposing Forces Surrogate Vehicles, or OSVs.

Based on the M-113A3 armored personnel carrier, the first of these replacements mimicked BMP-2 infantry fighting vehicles. Eventually, the Army built additional models to stand in for T-80 and T-90 tanks and other types.

“The cost to operate and support an OSV is approximately 50 percent less when compared to the M-551 Sheridan,” a piece in a late-1998 edition ofCombat Training Center Quarterly Bulletin declared. “Based on the high training operational tempo … which is approximately 3,000 miles per year per vehicle over the course of 10 rotations, this will generate a high cost savings for the Army in the years to come.”

On top of that, the Army had modified a number of Humvees to look similar to the BRDM-2 armored car. The National Training Center already had one of the actual Soviet-era types fitted with a TOW missile launcher so it could more easily use the laser training gear.

The ground combat branch ultimately got more than 100 OSVs to take over from the old M-551s. The Joint Multinational Readiness Center, a collection of American training facilities in Germany, received some of the unique vehicles for their own opposing force unit.

Like the 11th ACR, the 1st Battalion, 41st Infantry Regiment regularly brings these vehicles out for mock battles with NATO members and other U.S. allies. But unlike the sand-and-brown-color vehicles at the National Training center, the VISMODs in Germany feature a slightly more colorful camouflage scheme.

After the terrorist attacks on Sept. 11, 2001, the National Training Center and other facilities began to focus more on teaching soldiers how to fight insurgents. But militants often seized heavy weapons during their fighting with government troops.

Since 2014 in Iraq and Syria, Islamic State terrorists have captured tanks, armored personnel carriers and other vehicles. The terror group has sent them into combat in their intended role — and also turned them into mobile suicide bombs.

So whether troops are practicing to fight a traditional enemy or terrorists, the Army’s fake tanks — or newer models — are likely to be an important tool for the foreseeable future.