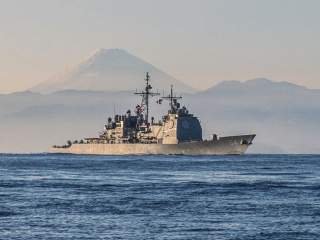 Since the end of the Cold War and the collapse of the Soviet Union, the U.S. Navy has essentially taken sea control for granted. Absent a challenge from a peer-level blue water threat, the service neglected anti-ship capabilities and focused on land attack. Indeed, as former Navy official Byran McGrath, managing director of The FerryBridge Group naval consultancy and deputy director of the Center for American Seapower at Hudson Institute testified before Congress this week, the service has not added a single ship that can fire anti-ship missiles since 1999.

“No ship in our inventory can disable another ship with its organic weapons at ranges greater than approximately 70 miles (the range of the Harpoon missile), and no ship has been added to the inventory since 1999 that can fire the Harpoon missile,” McGrath said. “In order to raise the level of conventional deterrence represented in our forward deployed surface vessels, the Navy must move quickly to close this gap. The pursuit of an elegant solution for the future should not preclude the immediate fielding of useful weapons available on the world market.”

Meanwhile, Russian, Chinese and Indian warships are fielding long-range supersonic anti-ship missiles like the Brahmos and 3M-54T (SS-N-27A Sizzler) that are difficult to intercept and pose an increasing danger to the U.S. fleet. McGrath suggested that one immediate solution to the problem is to convert the U.S. Navy’s existing arsenal of Tomahawk land attack cruise missiles (TLAM) into dual capable weapons with the addition of an anti-surface mode. The Tomahawk cruise missile would have a range of about 1000 nautical miles in an anti-ship role. “This single act will bring the most return on investment the fastest, and will guarantee that both the Flight III DDG (Arleigh Burke-class) and the DDG 1000 (Zumwalt-class) are also capable of firing this extended range surface to surface missile,” McGrath said.

However, there are concerns that while the Tomahawk would be effective against many threats, there are enemy vessels out there that are equipped with formidable air defenses where the missile would fall short. “Some analysts believe that against the most capable air defense units in potential adversary fleets, the subsonic TLAM will lack necessary capability,” McGrath said. “It must be remembered however, that not all adversary platforms are that capable, and the most capable units can be targeted and neutralized by other portions of the fleet architecture.”

Modifying the Tomahawk is only a short-term solution; the Navy needs a new missile to deal with future threats. “The Navy must move quickly to specify the requirements for a 21st century ASuW weapon or weapons—but without allowing this process to delay the TLAM modification,” McGrath said. “Commonality between air and surface missiles should be a goal but not a requirement that delays fielding. This missile must be capable against the world’s most advanced defense systems, and should be targetable against fixed and moving targets, at sea and ashore.”

While the Navy needs a next-generation missile, it will take time to develop such a weapon. The service does not have time to wait into the late 2020s to field an anti-ship missile. “Congress should direct the Navy to fast track this [Tomahawk missile modification with desired deployment in the early 2020’s,” McGrath said. “However, thinking that the TLAM modification solves the ASuW problem in the long term is incorrect. A new missile with advanced characteristics is required.”