Revealed: Why Bell Helicopter's New V-280 Could Be a Game Changer on the Battlefield 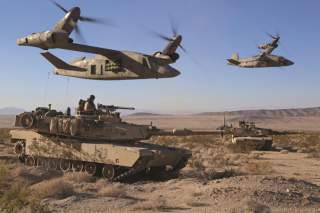 A new Army-led effort to engineer a next-generation tiltrotor aircraft for the 2030s includes the integration of a high-tech 360-degree sensor suite quite similar to the one used on the F-35 Joint Strike Fighter called a Distributed Aperture Systems, or DAS, developers explained.

“Instead of having sensors mounted to the turret, you have sensors that are mounted to the aircraft – so essentially you have sensors staring in 360-degrees around the aircraft at any given time. Those images are stitched together so it appears as one continuous image to the pilot. Both pilots can make use of the same system,” Vince Tobin, Vice President of Advanced Tiltrotor Systems, Bell Helicopter, told Scout Warrior in an interview.

The DAS system will also form the basis a small-arms enemy fire detection technology which will search for and locate the signature of incoming enemy attacks. The sensors will be able to discern the location and heat signature coming from enemy small arms fire, giving the aircraft and opportunity to quickly attack with its weapons – lowering risk of injury to the pilots, crew and passengers.

Bell helicopter has now attached the wing to the fuselage of a new, next-generation tiltrotor aircraft engineered to reach speeds of 280 knots, fly for 800 kilometers on one tank of fuel, hover and maneuver in “high-hot” conditions and function as both a utility and attack helicopter platform.

“There is one long wing. We attach the middle of the wing to the fuselage - the entire wing is one piece bolted to the fuselage of the airplane. One wing covers both sides. The wing is attached with aircraft grade structural fasteners. There are enough aircraft fasteners to provide sufficient strength to hold the aircraft together,” Vince Tobin, Vice President of Advanced Tiltrotor Systems, Bell Helicopter, told Scout Warrior in an interview.

“We had set 230 as the speed requirement because we wanted to push the technology.  We wanted people to bring new ideas and new configurations to the table,” Dan Bailey, JMR TD Program Manager, said in an interview with Scout Warrior several months ago.

The tiltrotors are slated to go on in November, Tobin added.