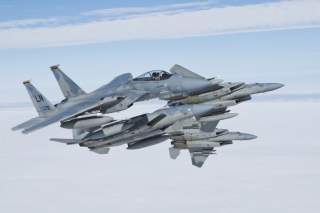 U.S. Air Force F-15C Eagles operating out of Turkey’s Incirlik air force base are not cleared to defend Ankara’s airspace even if confronted by Russian or Syrian warplanes. The Boeing-built air superiority fighters were originally deployed to the NATO base—which is relatively close to the Syrian border in Adana—because of increased Russian air activity near the border.

As one senior U.S. Air Force official explained, the service deployed six F-15C Eagle air superiority fighters and six F-15E Strike Eagle strike fighters to the Incirlik air base in November. While the Strike Eagles were tasked to hit Daesh targets in northern Syria, the F-15Cs were sent to stiffen Turkish air defenses against Russian encroachments.

“The C’s were sent to support Turkey when we believed Russia was increasing their border crossing violations,” the senior Air Force official said. “They were never cleared to defend Turkey or work in an air defense role and then the Turks shot that Su-24.”

The U.S. Air Force had not expected the Turks to shoot down the Russian bomber—nor had the service anticipated the Russian response. Soon after the Turks downed the Sukhoi Su-24 Fencer, Russian forces moved the missile cruiser Moskva to the Syrian coast. The massive warship is equipped with the powerful S-300F air defense system. The formidable S-300 is a deadly threat to conventional fighters like the F-15 and F-16.

Subsequently, the Russians deployed the even more fearsome S-400 air defense system to their base in Latakia, Syria, which enables them to engage targets deep inside Turkish airspace with relative impunity. Russians are also expected to deploy many more advanced fighter aircraft like the Su-30SM and Su-27SM3 to the region. “The whole Russian shoot-down and subsequent major Russian deployments of weapons in Syria is making this whole thing a mess,” the Air Force official said.

Proper ROE and procedures are necessary to avoid a repeat of the earlier event in which the Turks shot down a Russian Su-24 strike aircraft that had reportedly crossed the border for some seventeen seconds. Instead of escorting the aircraft out, the Turks shot the Russian jet down, causing a major incident.