Revealed: How the US Marine Corps Is Creating Its Own Third Offset Strategy 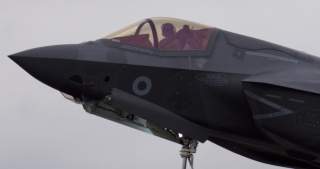 The senior leadership of the Pentagon is scurrying hither and yon in pursuit of the new vaunted Third Offset Strategy. Their efforts include going to Silicon Valley, Austin and Boston in order to establish relationships with sources of innovation in the private sector, spreading small amounts of research money around to stimulate new ideas and standing up new offices designed to more rapidly insert new capabilities into the current force structure. The problem with the way the defense department is pursuing its offset strategy is that it is almost entirely technology centric and largely divorced from all the other requirements for an effective new military capability: organization, training, sustainment and ISR.

So while DoD’s senior leadership searches for the Alchemist’s Stone to create innovation, back in the real world the U.S. military is busily working on many of the elements of a real Third Offset Strategy. The Marine Corps has been particularly engaged and rather successful in this regard. It has taken new capabilities, put them in the field with operating units, found their flaws, developed new tactics and concepts of operations and proposed improvements back to the developers.

One example of this is the MV-22 Osprey. It was always the case that the Osprey was not going to just be a helicopter that had the additional feature of being able to fly like an airplane. Once in the field, the Marine Corps discovered that the MV-22 when supported by KC-130 tankers became a strategic asset. The MV-22/KC-130 team enabled Marine units to conduct missions at ranges of a thousand miles and more from their bases or amphibs. Because of their range and potential to be asked to fly into hot landing zones, there is a current effort underway to look at options for arming MV-22s. The MV-22/KC-130 team is the heart also of the Special Purpose Marine Air-Ground Task Force that the Marine Corps now routinely deploys in order to supplement their limited number of Marine Expeditionary Units (MEU)/Amphibious Ready Groups (ARG).

Similarly, the Marine Corps is now considering how to employ the F-35B Joint Strike Fighter, the short takeoff vertical landing variant designed to replace the aging Harriers. The Marines will have the first fifth-generation fighters in the Sea Services. How might they be employed to support the Navy? The sensor capabilities resident in the F-35 make it a premier stealth ISR platform. The Navy and Marine Corps are now looking at ways of reconfiguring ship-based command and control functions to take advantage of these new capabilities.

Where possible, the Marine Corps is also leveraging developments in the other Services. The Corps will buy a number of Joint Light Tactical Vehicles, essentially an armored truck, the primary customer for which is the U.S. Army. Similarly, the Marines are trying to get permission to reprogram FY2016 funds to buy a number of ultralight vehicles, the same types already procured by Special Operations Command that can be carried by MV-22. If the results of the Army’s planned evaluation of existing active protection systems are successful, the Marines may buy some number for their combat vehicles.

With money provided by the Pentagon for experimentation, the Marine Corps is looking at new concepts for conducting littoral operations in a contested environment. This involves, among other things, considering ways of reconfiguring the ARGs. Too often of late, the three ship formations have been split apart, with ships often operating in different seas and under different Combatant Commands. It may be possible to reconfigure cargoes and alter command and control capabilities in order to make the ARG more flexible.

A more challenging aspect of littoral warfare is ship-to-shore maneuver. While the desire for a long time has been to develop a new amphibious warfare vehicle that could move at high speed from offshore amphibs directly to the shore and into combat, this has proven a very challenging goal. Now the Marine Corps is wisely addressing the problem in increments, developing its amphibious combat vehicle in successive steps, buying only the number necessary in order to support current operations and experimentation while investing in supporting technologies.

In part because it is the smallest of the Services, in part because it has the fewest resources and, in part because it has to continually figure out how to respond to changes in threats and missions both on land and at sea, the Marine Corps has made an art of applying other people’s systems as solutions to its problems. Whether it is operating the F-35, deploying from distributed assets of amphibious warfare vessels, developing manned-unmanned teaming or assaulting a foreign shore, the Marine Corps is busily creating that much desired Third Offset right now.

This first appeared in the Lexington Institute's blog here.