RIP 'Fog of War': The US Army's High-Tech Master Plan to Kill the Enemy 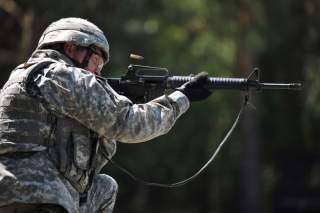 The Army is upgrading and more widely deploying a cutting-edge battlefield force-tracking technology for dismounted Soldiers, enabling them to know the locations of their fellow Soldiers and more quickly find, identify, target and destroy enemy fighters.

“The power of this is to network the Soldier,” Lt. Col. Adrian Marsh, Product Manager, Ground Soldier System, told Scout Warrior in an interview.

The Army plans to more-widely deploy Nett Warrior, which has already been fielded with operational units, Marsh said.

“It provides unprecedented situational awareness at the dismounted level through the map display. The icons show where all the other users are on the battlefield and the device allows for battlefield messaging. Everyone sees the same picture,” Marsh explained. “The battle changes in real time and information can transmit across the force in real time.”

“As they sweep up into a house, they don’t have to worry about fratricide, because they can see where the other maneuvering forces are. You can track the location of friendly units as you are moving up on a target,” said Jason Regnier, deputy product manager for Nett Warrior.

The concept behind the development of Nett Warrior is to put the Soldier in the center of the network so that he or she is instantly equipped with fast-changing battlefield information. If a mobile, forward deployed infantry unit was taking an enemy building, for example, Nett Warrior would give them instant information about the location of friendly and enemy forces in relation to surrounding terrain.

Nett Warrior can even connect with nearby vehicle units who might need to know the location of mobile, ground or infantry units or wish to pass along combat-relevant information, Marsh said.

While the Nett Warrior device looks like a cell phone or smartphone, it uses what’s called software programmable radio – a technology which sends IP packets of information, such as voice, video and data, across the force using high bandwidth radio frequencies.

The high bandwidth frequencies, such as Soldier Radio Waveform, use computer technology and function quite similar to wireless internet. The cell phone function of the system is turned off. The radio, called the Rifleman Radio or PRC-154, uses NSA encryption to safeguard combat information transmitting across the force.

The technology also uses a technique called a “chem light,” wherein a Soldier can highlight or “light up” a location to pass along key information such as the location of a cleared building or other data relevant to an ongoing fight.

“This helps the fight at the Platoon level by providing a visual picture or voice instruction about, for example, the location of a house they are going to take down,” Marsh added.

Nett Warrior also uses a chat or messaging function so that Soldiers can quickly communicate with one another in addition to looking at the screen on the device. Quickly translating from Arabic or Pashtun to English is also an emerging capability of Nett Warrior, a technology which could greatly help deployed Soldiers acquire and transmit key battlefield information.

The platform is now being built with what the Army calls “open architecture,” meaning its software and hardware are engineered to quickly embrace and integrate new technologies or applications as they emerge, Marsh said.

One such future instance will likely include the addition of field artillery information on the Nett Warrior system, among other things, he added.