RIP Railgun: Why the U.S. Navy's Super Weapon Might Be Dead 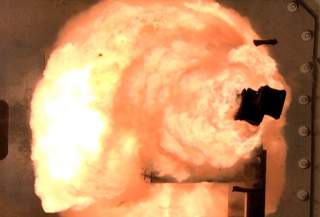 “We thought railguns were something we were really going to go after,” then-Deputy Defense Secretary Robert Work stated at the Atlantic Council in Washington, D.C. in May 2016. “But it turns out that powder guns firing the same hypervelocity projectiles gets you almost as much as you would get out of the electromagnetic rail gun, but it’s something we can do much faster.”

The potential for rapid fielding across both the Army and Navy proved an alluring prospect for SCO’s mission, one that trumped the railgun’s hype. When asked about the organization’s priorities, SCO spokesman Chris Sherwood confirmed to Task & Purpose that the office is focused on “developing the [HVP] for use in existing powder gun systems to give the Navy and Army near-term, cost-effective long-range fires and missile defense solutions.” Translation: Why invest in an expensive gun if the bullet alone can get the job done?

SCO has publically emphasized that it’s not abandoning the electromagnetic railgun outright. SCO chief William Roper insisted during a July 2016 conference that months after Work’s dismissal of the railgun, the new focus on the HVP would not jeopardize ONR’s work on the fearsome cannon. “[It’s] not that we’re not interested in railgun — we are,” he said. “But if you look at the delta between fielding in quantity — we have [more than] a 1,000 powder guns, we have very few railguns.”

But according to military and legislative sources, SCO already squandered a shot at helping ONR achieve its critical shipboard installation milestone. In the internal justification memo obtained by Task & Purpose, Rep. Langevin’s office attributed the cut to transition funding under the 2017 defense budget to SCO, “[the] initial entity responsible for work done on the railgun mount, which they subsequently never undertook, leaving the responsibility to the Navy.”

The problem of transition funding facing the electromagnetic railgun isn’t totally unique. Congressional budget anxieties frequently kill ambitious weapons development projects; consider the 7.62mm Interim Combat Service Rifle, the extra-lethal combat rifle solicited by the Army to defeat enemy body armor that ended up dead on the vine. As one congressional source put it, “the greater question of uncertainty is: Just how much priority will the Navy and DoD give on the railgun in the coming years?”

An analysis of the Navy’s 2018 RDT&E funding request by Task & Purpose reveals significant changes in the line items that govern directed-energy systems. Appropriations for Power Projection Applied Research fell from $88.94 million in FY 2016 to $13.6 million in FY 2018 due to a reallocation of funding from railgun barrel testing; similarly, appropriation for Future Naval Capabilities Advanced Technology Development fell from $251.17 million in FY 2016 to $205.6 million, although this was partially due to the ramp-down of additional HVP research & development under that specific line item.

This isn’t to say the railgun is now completely without funding — Congress appears poised to fund a new Innovative Naval Prototypes line item to the tune of $163.1 million for a demonstrator, but the shifting funds reflect the SCO’s desire to separate the HVP from ONR’s existing suite of directed-energy programs.

“Money is being put into HVP, and not railgun projects, which is why the two are being split,” as one senior legislative official told Task & Purpose. “We’ve been able to rescue some of this funding, but Big Navy sees different opportunities, and because [the railgun] is a major challenge, they don’t want to explore it.”

As far as the Navy is concerned, the focus has remained on the core of the railgun project: the pure science and research that could, in time, put the futuristic weapons of tomorrow within the Pentagon’s grasp.

“ONR’s intention is to continue working on the system, continuing to maturing the components, and moving towards demonstrating a full-scale 32 megajoule launcher and pulsed power system capable of high repetition firing,” ONR’s electromagnetic railgun program manager Thomas Boucher told Task & Purpose, declining to comment on funding decisions. “The S&T has continued to make great technical progress and there have been no show stoppers to date to prevent the Navy from having a railgun in the future.”