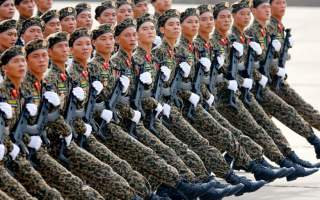 It was inevitable, but nations in the South China Sea that have overlapping claims with the People’s Republic of China are now beginning to push back–and this time we are not talking about Lawfare or my beloved Shamefare, but are now finally enhancing their own military capabilities.

The report goes on to note that Hanoi shipped the weapons from the Vietnamese mainland to five bases in the disputed Spratly Islands “in recent months.” It also explains that “the launchers have been hidden from aerial surveillance and they have yet to be armed, but could be made operational with rocket artillery rounds within two or three days,” according to multiple sources in the story.

The weapons in question that Vietnam chose to deploy also make a big statement. Interestingly enough, they are not some second-tier platform from 20 years ago, but the EXTRA rocket artillery system made in Israel — a great platform for attacking invading soldiers landing on island beaches.

A reaction to Chinese aggression

So what to make of all of this? My response is quite simple: What took Hanoi so long considering the stakes and China’s own aggressive actions in South China Sea?

While there is certainly plenty of blame to go around and none of the claimants in the South China Sea struggle are innocent of creating unnecessary mischief, Beijing has clearly been the aggressor in recent years.

Its declaration of a cow-tounged nine-dash-line (really ten, but who’s counting?) and historical claim of everything in between those lines, comprising almost all of the South China Sea, has driven tensions to new heights as Beijing has sought to enforce its claims.

From harassing rival claimants’ fishing fleets, utilizing its “maritime militia” to ensure its dominance on the high seas, placing oil rigs on multiple occasions over several years in disputed waters near Vietnam and building massive new islands that are clearly militarized, there is only one nation that seeks to overturn the status-quo.

Even a major defeat in the Hague has not slowed China’s push towards regional dominance — now including what I like to call “bomber selfies.”

Hanoi has the Tools to Push Back:

Of all the nations in the South China Sea that are in the best position to push back against Beijing’s bullying tendencies, clearly Vietnam has the most ability and capability — and some unique diplomatic options.

Hanoi has purchased some of the world’s most advanced conventional submarines from Moscow in recent years, also acquiring advanced fighter aircraft from the Russians as well.  Vietnam, while still outmanned and surely outgunned in a firefight with Beijing, has been purchasing platforms that would at least give China some pause, with some arguing Hanoi could even be putting together a crude anti-access/area-denial capability (A2/AD), right out of China’s military playbook.

But beyond military and economic levers, both nations — well, at least on paper, anyway — are fellow Communist countries, and ‘party to party’ talks still occur. Hanoi and Beijing have the ability to discuss the South China Sea challenge discreetly, away from the media, with top leaders in this format able to exchange views in a more candid nature.

Vietnam could leverage such connections, working with their colleagues in China to seek possible compromises — or at least voice their displeasure without creating a diplomatic incident.

But there is danger here that any first or second year political science student would recognize almost instantly — the infamous security dilemma that could spiral into a classic arms race.

While Vietnam’s move is merely a reaction to China’s much, much larger militarization of its own South China Sea islands, Beijing will very likely use this action by Vietnam to respond — and possibly even increase its military lead over rival claims substantially.

Indeed, in recent days, it has been shown that China now has large, military grade, reinforced hangars on its new islands in the South China Sea, capable of housing any plane in the Chinese arsenal. Beijing could simply decide to base some of its most lethal air assets permanently here. And don’t forget, China has said time and time again that its decision to declare an Air Defense Identification Zone, or ADIZ, would be based on what Beijing felt was the overall security picture in the area.

Does this move by Vietnam make such a step more likely? We might just find out soon enough, but not until early to mid September.