Rodrigo Duterte's Path to Dictatorship in the Philippines? 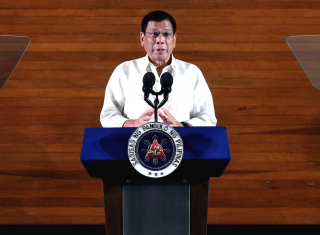 “Until the armed forces and the police say that the Philippines is safe, this martial law will continue,” Philippine President Rodrigo Duterte said during a crisis management visit to Mindanao, suddenly the epicenter of terror group Islamic State’s thrust into Southeast Asia.

“I will not listen to anyone else, be it the Supreme Court, congressmen. They’re not here.”

The tough-talking, popularly elected Filipino president has again raised the specter of forging a full-blown dictatorship, sparking fears he could veer the country back towards the iron fisted, rights abusing rule seen under former autocrat Ferdinand Marcos.

Marcos leveraged a deteriorating security situation in 1972, characterized by mysterious bombs in the capital and a rising communist insurgency, to impose over a decade of emergency rule that brooked no opposition. Duterte has repeatedly warned he may extend martial law beyond his home island of Mindanao across the entire country if Islamic militants strike other areas.

The controversial leader provoked a global outcry by quipping that he would stand “shoulder to shoulder” with his soldiers even if they committed rape while waging war.

Legal experts and human rights advocates said that Duterte could potentially be prosecuted if such statements were construed as encouraging war crimes. Presidential aides have said Duterte’s comments were merely “heightened bravado” and not calls to rape and pillage.

Duterte’s controversial statements were likely meant to communicate his support for the military and security forces, which are now charged with implementing his martial law order. The comments also likely aimed to strike fear into the hearts of his opponents, namely the Islamic State affiliated groups which have laid a bloody siege to the city of Marawi.

The Philippine military claims that it is taking back full control of the besieged city, the largest in the Muslim-majority region of the Philippines. Reports from the ground suggest that the government is waging a tortuous and risky urban warfare, which may last for weeks if not months.

Almost the entirety of the city’s population has fled in fear and desperation, but a significant number have stayed behind to protect their belongings from theft and destruction. This has raised the risk of civilian casualties and placed constraints on the government’s military operations, which have included aerial bombardments.

The government is perturbed by reports that foreign fighters, possibly even from the Middle East but definitely from neighboring Indonesia, Malaysia and even Singapore, have been involved in the Marawi clashes.  If true, it marks a precarious internationalization of Mindanao’s long-running conflict.

As the first Filipino president from Mindanao, Duterte is under extraordinary pressure to not only eliminate the threat of IS infiltration into the Philippines, but also to end the conflict in his home island, one of his top campaign promises.

While rights advocates and political opponents have rung alarm bells over Duterte’s declaration of martial law, the order has won support across the wider political establishment and apparently a broad cross-section of the general public that fears the violence seen in Marawi city could spread across the country without a firm government response.

According to the Philippine Constitution, the president will have to secure the approval of the legislature to sustain and extend martial law beyond its initial 60-day limit.

Duterte currently enjoys super-majority support in the lower house, but has faced stiff resistance in the upper-house Senate, where independent as well as opposition members have often openly criticized the president’s conduct and policies.

Several of them have already strongly opposed any extension of martial law beyond Mindanao while seeking full congressional approval of the declaration.

Duterte’s allies, however, have managed to stifle that opposition. Fifteen of 23 senators have filed a resolution affirming the legality and validity of Duterte’s executive order. Voting 12-9, Duterte’s allies also struck down a resolution, filed by opposition members, to convene a joint session of both houses of Congress to collectively assess the legal grounds for martial law, as required by the Philippine constitution.

This is the fourth time in Philippine history that an elected president has resorted to martial law to address a security crisis. The first came under Jose P Laurel, a transitional leader during the Japanese occupation of the Philippines in 1944. Then came president-turned-dictator Marcos, who assumed full emergency powers in 1972 until his dethronement in 1986.

Prior to Dutetre, the most recent declaration was by the highly unpopular President Gloria Macapagal-Arroyo, who declared martial law in the province of Maguindanao for only eight days in December 2009. Both Marcos and Laurel, however, maintained long-term martial law which contributed to their eventual downfalls.

Other democratically-elected presidents, namely Fidel Ramos (1992-1998), Joseph Estrada (1998-2001), and Benigno Aquino (2010-2016), all refused to declare martial law even when faced with large-scale rebellion and similar clashes with extremist groups in Mindanao.

Duterte is now focused on soliciting assistance from other major rebel groups, including the Moro Islamic Liberation Front, the Moro National Liberation Front, and communist insurgent groups, to fight against IS-affiliates like Maute Group and the Abu Sayaff Group, both involved in the Marawi city siege.

After dedicating much of his first year in office to a brutal campaign against illegal drugs, Duterte is now scrambling to address a security crisis with complicated international dimensions. While his initial resort to tough security measures is in line with his hard-knuckled rule, it will take all of his diplomatic and political skills to halt Islamic State’s march into a volatile region long skeptical of Manila’s rule.