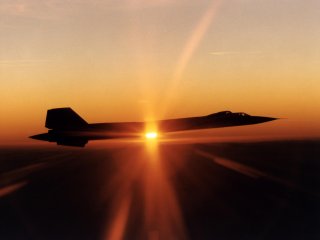 Lockheed Martin’s 2013 announcement of a proposed SR-72 reconnaissance and strike drone comes against a backdrop of decades of rumor about a replacement for America’s high-speed SR-71 spy plane. The SR-72 reportedly appeared for the first time in plain view in July 2017.

Since the early 1990s, there have been reports of mysterious sonic booms, unidentified aircraft sightings and a mysterious aircraft on a wall chart at Lockheed Martin.

The existence of an early replacement for the SR-71—which was permanently retired in 1998—has never been verified. Aviation buffs call the apparently mythical plane Aurora. It’s the Bigfoot of the aviation world.

The story of Aurora began in 1990, when Aviation Week & Space Technology mentioned that “Aurora” had been a line item in the U.S. defense budget in 1986 for “black aircraft production.” Aurora funding allegedly reached $2.3 billion in 1986, prompting speculation that a replacement for the SR-71 was in the works.

The name stuck, and the chase was on. But was it an Aurora chase, or a wild goose chase?

In 1988, The New York Times reported that a successor to the SR-71 was being developed—one capable of flying at Mach 5. The SR-71 was pulled out of service two years later and made a brief comeback in the late 1990s.

In the early ’90s, a series of mysterious sonic booms began rattling the California coastline, noises that defied easy explanation. To this day, sonic booms are still reported across swathes of southern California. One such report from April 2009 was investigated by the local press, which could find no explanation for it.

Many are undoubtedly from natural phenomena, such as meteorites entering Earth’s atmosphere. But some of these sonic booms are obviously from run-of-the-mill military sources. And Aurora watchers have their own explanation. The booms are from Aurora returning to bases in southern California after flying over the Pacific Ocean.

Whatever was creating the sonic booms, they were picked up by California’s earthquake monitoring network. Designed to record tremors in the Earth, seismographs monitored by the U.S. Geological Survey have inadvertently picked up the booms. In 2001, a paper produced at the the California Institute of Technology ‘s Graduate Aeronautical Labs analyzed the booms and concluded that whatever they were, they came from some unknown, offshore event.

The regularity begs two questions. If the sonic booms are a natural phenomenon, why were they suddenly occurring now? Second, if the booms were made by the U.S. military, as they occasionally are, why is the military unable to explain them?

There have also been sightings of mysterious aircraft attributed to Aurora. In 1989, Chris Gibson, a veteran plane watcher and former member of the Royal Observer Corps, reported seeing a mysterious aircraft while stationed on an oil rig in the North Sea. Gibson reported the aircraft resembled an isosceles triangle and was accompanied by a KC-135 tanker aircraft.

In 1992, aviation enthusiast Stephen Douglass photographed what came to be known as “donuts on a rope” contrails. The unusual contrails were said to be accompanied by an unusual, pulsating engine roar. Both have been attributed by Aurora buffs to the use of pulse-detonated wave engine technology allegedly used by Aurora to achieve hypersonic speeds.

In 1992, Aviation Week reported that military-monitoring hobbyists had listened in on an exchange between Edwards Air Force Base and an unknown, high-altitude aircraft identified as “Gaspipe.” Edwards aircraft controllers could be overheard advising “Gaspipe” that it was being tracked at 67,000 feet—far above the normal operating altitude of military aircraft, where flight crews of the U-2 and SR-71 typically wear pressurized flight suits. The Air Force confirmed that neither U-2 nor SR-71 aircraft were being controlled at those times.

Then it got even weirder.

In the late 1990s, journalist Nick Cook of Jane’s Defence Weekly traveled to Lockheed’s famed Skunk Works to interview its head, Jack Gordon, and tour the facility. He later recounted a mysterious incident that left him scratching his head.

“Just before I left the [Skunk Works] building, I stopped in front of a large chart on the wall of the lobby area,” Cook wrote. “I hadn’t noticed it on the way in. It proudly illustrated the lineage of every Skunk Works aircraft since the XP-80. Past the picture of the U-2, past the SR-71 Blackbird and the F-117A Stealth Fighter, past the YF-22 and DarkStar, and there was something called ‘Astra.'”

“Sitting at the top of the tree, Astra looked like an ultra-high-speed reconnaissance aircraft,” Cook added, “every pundit’s dream of how Aurora ought to look.”

Cook asked Lockheed’s press representative what “Astra” was, and weeks later was told it was a 30-year-old “concept for a high-speed airliner.”

That a 30-year-old concept plane would be at the top of a tree of Skunk Works aircraft is … peculiar.

From black to white?

Part of the reason Aurora has fascinated so many for so long is because—piecing together various sightings, rumors and reports—a timeline emerges that looks like the developmental and operational timeline of a real aircraft.

That, and people like things that go real fast.

Could the SR-72—which Lockheed Martin has designed to fly at speeds up to Mach 6—represent an aerospace program that has existed for some time in the world of secret “black” aircraft programs, and is now being pushed into the “white” world of public programs? If so, why now?

Finally, one has to ask. Given the importance of strategic reconnaissance flights to the U.S. military, why wouldn’t a replacement to the SR-71 have been built a long time ago? Why does the plane announced by the Skunk Works today look like Aurora concept art from 20 years ago, and why does something just like it appear on the wall at the Skunk Works alongside operational aircraft?

Maybe there was no Aurora all along. Or maybe Lockheed’s 2013 announcement — and the July 2017 sighting — means there finally will be an Aurora, just 20 years late.