Run Silent, Run Australian? Why Australia Should Build Its Own Subs 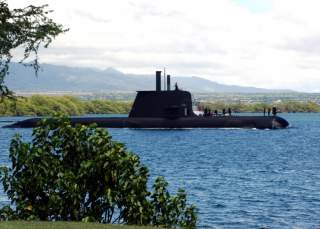 The case for building the next generation of Royal Australian Navy (RAN) submarines in Australia begins with the stand-out attributes that make submarines so important for Australia as a whole: they must be able to operate in areas a long way from home, without air or sea control, to watch, listen, evaluate and act when necessary. Australia’s future submarine will be a unique platform, giving early warning of an adversary’s intentions and providing an excellent antisubmarine and anti-surface ship capability.

As discussed in an earlier post, these capabilities are based on the submarine’s key attribute—stealth—which enables access to sensitive or critical areas denied to other vehicles and surveillance systems.

In simple terms, a submarine has to have sufficient buoyancy to support its payload when it’s underwater (that is, to be neutrally buoyant). If you add more fuel (or any other payload), you have to either take out an equivalent weight or increase the vessel’s volume. Simply lengthening an existing design by adding hull sections to increase volume works only so far. As the ratio of the vessel’s length to its diameter grows, it becomes noisier, less agile and less efficient.

At some point, increasing the volume of a submarine requires an increased hull diameter. But once that threshold is crossed, you’re no longer dealing with the same design. It’s safer to put all the parameters on the table and design a submarine with the volume to carry the payloads required for the desired capability.

The recent discussion in the press on the possible acquisition of Japanese submarines by Australia (dubbed ‘Option J’) raises a number of issues. Despite what’s been surmised based on the relatively large submerged displacement of the Soryu class, the current Japanese submarine appears to have less payload, endurance and mobility than the Collins. That isn’t surprising—Japan’s requirements are different from ours.

So any Japanese boat is likely to require modification to meet Australia’s requirements, particularly for long-ocean transits and patrols. Australia’s also certain to want to install a US combat system, communications fit-out and weapons suite. Those changes will carry cost, performance and schedule risks that are best handled as a developmental project rather than as an off-the-shelf acquisition.

Quite apart from the suitability of the design, a Japanese purchase would entail particular risks. The prospects for difficulties arising from cultural differences with Japan are significant. Accessing all the relevant technologies during the course of an overseas build of a complex vessel and understanding the design intent (critical to supporting the submarine) would be extraordinarily ambitious and inherently risky. And Japan has no experience with foreign customers for military exports.

The lure of having submarines built overseas rests upon the assumption that it’d be more expensive to build them here. But design and construction are only one-third of the cost of ownership. The balance arises when the boat is in service.

It’s worth looking at how other countries approach the problem of maintaining a cost-effective submarine force. Germany, France, Japan, Sweden, the UK and the US all have national designers and builders for their submarine programs. Common characteristics of their approaches include the following:

-New designs are undertaken as developmental projects in a seamless process, avoiding traditional step-by-step design, which can lead to delays, design changes and cost escalation.

-The cost of ownership is considered front and center at the design and construction phases so that it can be minimised.

-The builder and in-service support industries inject their knowledge into the design, thereby minimising the requirement for costly re-work or extra maintenance.

To optimize a submarine design from a whole-of-life perspective requires the designers, builders and maintainers to work closely together during the design and build phases. That’s best achieved if they’re co-located, as they tend to be in the countries mentioned.

There’s an important lesson here for Australia: coordination will be much easier if the build occurs in Australia, where the design will be supported throughout its life, rather than at an overseas shipyard with different standards and practices and a language barrier.

Whatever the design source, Australia’s future submarine will have substantial differences from the overseas navy’s design. As it was for Collins, Australia will be the parent navy for the future submarine. The Coles review highlighted the vital importance of establishing through-life logistic support arrangements in Australia during the construction phase. It’s critical that Australia has full access to the technologies and intellectual property underpinning the future submarine; otherwise, the effectiveness of the new boat will rely on the relationship with the overseas parent navy and its industry base.

In addition to the challenge of establishing cost-effective through-life support, building Australia’s future submarines offshore would entail a number of additional costs:

-Transferring Australian engineers, construction personnel, submarine crews and their families to stand by for two- to four-year periods in an overseas shipyard across the 28 or so years needed to build 12 submarines would be neither cheap nor practical.

-The land-based test sites and maritime test ranges used to reduce risks during construction and for acceptance testing are also required in-service, which imposes additional costs for using overseas facilities in addition to building our own facilities.

Australia’s use of US-sourced weapons and combat systems also poses sensitive problems for acceptance testing on a foreign test range.

In my next post I’ll consider the lessons from Collins, the possibility of a hybrid build and sum up the case for building in Australia.

Peter Briggs is a retired RAN submarine specialist, submarine commanding officer and past president of the Submarine Institute of Australia. Peter has no affiliations with any of the potential suppliers to the RAN’s SEA 1000 project. This piece first appeared in ASPI’s The Strategist here.