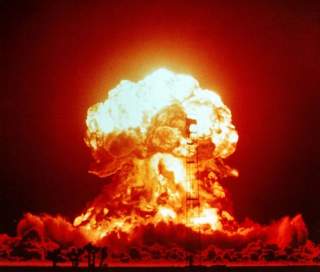 Russia’s Strategic Missile Forces are conducting their largest drills ever, according a state-run media outlets.

On Tuesday, Col. Igor Yegorov, a spokesman for the Strategic Missile Forces, told Interfax-AVN that the unit began the largest drill in its history on Thursday. According to Yegorov, over 30 missile regiments and both road-mobile and silo-based missile systems are expected to participate in the massive drills.

The exercise it taking place across a vast sway of territory, covering an incredible twelve different regions in the country, from Tver region in western Russia to the Irkutsk region in the east. According to Google Maps, that’s a distance of about 3,998 km (2,484 miles).

Yegorov said the drills will test the Strategic Missile Forces’ preparedness for a wide variety of potential scenarios.

"Strategic missile units are practicing a broad range of missions, including red alert, maneuvering in actual combat and deterrence of sabotage units and precision-guidance attacks of a simulated enemy," Interfax quoted Yegorov as saying.

The spokesman for the unit went on to explain that the first day of the drill was devoted largely to defending deployed road-mobile missiles from sophisticated enemy sabotage attacks. “According to the drill scenario, sabotage groups of the simulated enemy laid mines on combat patrolling routes [of missile units] and applied poisonous chemicals to the area adjacent to their field positions," Yegorov said, Interfax reported.

The drill’s focus on protecting deployed road-mobile missile units is indicative of Russia’s desire to better operationalize its strategic forces to execute its nuclear doctrine. Although the Soviet Union maintained a no-first use military doctrine, the erosion of Russia’s conventional military power following the Cold War has forced Moscow to increase its reliance on its nuclear weapons to defend itself. As such, Russia abandoned its no-first use pledge in 1993 and, following NATO’s interventions in the Balkans in the 1990s, issued a new National Security Concept in late 1999 (officially adopted in 2000).

This document lowered the threshold for when Moscow would consider using nuclear weapons to include “preventing aggression on any scale… against Russia and its allies.” In this sense, Russia’s nuclear doctrine is similar to the one the U.S. quietly used throughout most of the Cold War to “offset” the Soviet Union’s numerically superior conventional forces in Europe.

Despite its greater reliance on these weapons, for many years Russia’s nuclear capabilities continued to atrophy, even as arms control agreements with the United States greatly reduced the size of Moscow’s strategic arsenal. In fact, by the middle of the 2000s some U.S. security analysts argued America had achieved nuclear primacy.

Since securing his third term as president in 2012, however, Vladimir Putin has sought to reverse this trend by modernizing Russia’s nuclear forces. Indeed, shortly before the 2012 presidential elections in Russia, Putin pledged, “We should not tempt anyone by allowing ourselves to be weak. We will, under no circumstances, surrender our strategic deterrent capability. Indeed, we will strengthen it.” Similarly, just last December Russia’s Chief of the General Staff, Valery Gerasimov, said that the country’s nuclear modernization will be the Defense Ministry’s top priority in 2015.

True to their word, Russia has undertaken an ambitious effort to modernize all three legs of its nuclear triad by 2021.It has also announced plans to add an additional 8,500 troops to the Strategic Missile Forces by 2020.

As part of this larger effort, Russia has been conducting increasingly frequent and more sophisticated snap nuclear exercises like the one that is currently taking place.