Russia is Bringing Back Its World War II 'Shock Armies' 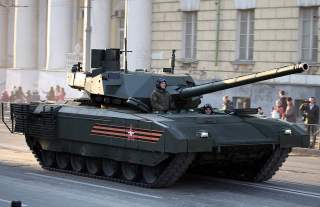 During World War II, one of the weapons that the Soviet Union employed to destroy Nazi Germany was the “Shock Army.” These were reinforced army-sized formations used to tear holes in the German lines for Soviet tanks to exploit.

Now Russia plans to bring back Shock units. Yet lest anyone fear this is a prelude to a Russian blitz of Ukraine or the Baltic states, the title “Shock” will be an honorific reward for units that perform particularly well.

“78 units, subunits and formations are currently being considered for the ‘shock unit’ title,” Lieutenant-General Ivan Buvaltsev, head of the Russian military's Main Administration of Combat Training of the Russian Armed Forces, wrote in a May 11 article in the Russian military newspaper Krasnaya Zvezda. Buvaltsev also said “the title may be given to forces including motorized rifle troops, tank units, marines, airborne, air assault and other units and subunits.”

“This use of ‘shock’ is apparently designed to recognize subunits, units, and formations that demonstrate a higher degree of training and performance,” David Glantz, a retired U.S. Army colonel and expert on the Russian military, told the National Interest. “The emphasis here is on improving force readiness.”

Glantz, perhaps the foremost Western historian of the Soviet military in World War II, explained that the Shock Army concept predates World War II. “Actually, the term ‘shock army’ dates back to the early 1930s, when, according to Field Regulations, these were highly trained and reinforced armies designated to spearhead offensive operations. The task assigned to these armies was to create tactical penetrations through which mobile forces (initially cavalry, but later mechanized corps) were to conduct exploitation into the operational depths.”

Thus shock armies were to be battering rams that would blast a hole in enemy lines, through which armored units would fan out into the enemy's rear areas, severing supply lines and overrunning command posts and artillery batteries. It illustrates how sophisticated Soviet doctrine was for conducting army-level maneuver operations, at least on par with German blitzkrieg theory and far more advanced than American, British and French thinking at the time.

Unfortunately, Stalin’s purges of most every competent prewar Soviet general, and the devastation of the German invasion in June 1941, rendered such operations beyond the Red Army’s capacity in the early days of the Russo-German War. However, in December 1941 and January 1942, the Soviets created four shock armies to lead their winter counteroffensive. The First, Third and Fourth Shock Armies were deployed near Moscow, where they threw back the German forces threatening the city. The Second Shock Army was deployed at Leningrad, where it was twice encircled and destroyed by the Germans in 1942 (its commander, Andrei Vlasov, was captured by the Germans and defected, becoming the commander of an anti-Soviet army raised by the Nazis).

More successful was the Fifth Shock Army, which reinforced the devastating Soviet counteroffensive at Stalingrad in December, and fought off attempts by the German Forty-Eighth Panzer Corps to relieve the encircled Sixth Army.

Despite prewar doctrine that called for shock armies to heavily reinforced and well-trained, wartime exigencies made the actual formations much more haphazard. “1st Shock consisted of hastily raised and deployed rifle brigades and meager tank support, while the other three shock armies fielded in late 1941 and early 1942 were made up of rifle divisions and tank brigades, leavened by the first several Soviet Guards rifle corps,” Glantz said. The Fifth Shock Army was the strongest, with an attached tank corps and Guards cavalry corps.

The elite units of the Red Army in World War II were actually the Guards units, so designated because they had distinguished themselves in battle. By 1943, “shock armies were seldom larger or more powerful than other field armies, nor did they have the (theoretically) stronger composition of a Guards army,” Glantz says.

In that sense, the new shock units sound closer to the Guards formations of World War II. Should the West be concerned? No more than the Russian should be when the United States names its warships after famous battles, like the USS Anzio and Saipan. The U.S. Army also highlights the historical lineage of units such as the Eighty-Second Airborne.

Moscow is merely using the glories and heroism of the Red Army of the Great Patriotic War to motivate its soldiers of today.