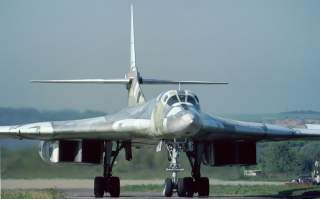 Despite its economic struggles as oil price remain stubbornly low, Russia is pressing ahead with plans to develop its new PAK-DA stealth bomber while simultaneously resuming production of the Tupolev Tu-160 Blackjack supersonic strategic bomber. However, Moscow will delay the PAK-DA effort in favor of the advanced Tu-160M2 derivative of the Blackjack, but the program will not be cancelled.

“We certainly are not going to stop the work on the development of PAK-DA,” Yuri Borisov, Russia’s deputy defense minister told the Moscow-based TASS news agency on April 15.

The PAK-DA is likely to leverage many of the technologies that are expected to be incorporated into the new Tu-160M2 variant. That would follow the previous practice established by the Su-35S Flanker-E and the Sukhoi PAK-FA fifth-generation fighter project—which share many key technologies. Indeed, while the Tu-160 will be an upgraded version of the Blackjack airframe, under the hood it is expected to be an almost completely new aircraft with brand new avionics.

“Tu-160M2 is an aircraft with new capabilities and flight and life characteristics. Its tactical employment level is considerably higher than that of its ancestor,” Borisov said. “All the innovations appearing at present should be embodied in the next model, which will replace the Tu-160.”

The PAK-DA—which is being developed by Tupolev—is expected to be a subsonic flying-wing aircraft that is roughly analogous to the Northrop Grumman B-2 Spirit and the U.S. Air Force’s forthcoming Long Range Strike-Bomber. Flying wings lend themselves well to low observable characteristics—particularly against low frequency radars operating in the UHF and VHF bands. Meanwhile, the PAK-DA’s engines, which are being developed by the Kuznetsov design bureau, are an advanced derivative of the Tu-160’s NK-32 turbofans. It’s also likely make use of advanced electronic warfare capabilities.

The PAK-DA will probably not be a small aircraft. It is expected to have a maximum gross take-off weight of about 250,000lbs—about the size of a Boeing 757 airliner. According to Russia & India Report, Russian Air Force’s requirements state that the bomber will have a range of 6,740 nautical miles. It will also be able to carry 60,000lbs of weapons. But those numbers can’t be independently verified.

The PAK-DA is a break from previous Russian and Soviet bombers, which have generally focused on using a combination of speed and long-range cruise missiles to deliver their payloads. The PAK-DA is the first Russian bomber optimized for stealth. However, previous comments from Russian defense officials suggest that the PAK-DA will serve as a launch platform for long-range nuclear and conventional cruise missiles and a host of precision-guided munitions. It might also eventually be armed with hypersonic missiles if previous statements from Russian officials hold true.

It’s not clear when the Russians expect to field the PAK-DA. At last report, the new bomber was expected to make its first flight sometime before 2021, with the first deliveries starting in 2023. However, the project is expected to be delayed due to Moscow’s plan to resume production of the Tu-160M2.