Is Russia Building an Army of Robots? 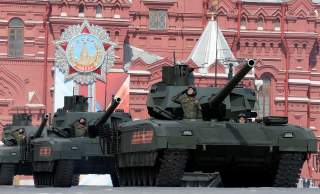 Russian defense minister Sergei Shoigu made a significant announcement in mid-March 2018 at a domestic technology forum. “The serial production of combat robots for the Russian armed forces may start already this year,” he stated.

Shoigu also implied, in response a question about whether remote-controlled unmanned systems would be utilized in the future, that the concept of a combat unmanned system remotely operated by a human has already been implemented in the Russian armed forces.

Shoigu’s statement is significant, if only to clarify the Russian position with respect to its numerous unmanned combat systems – systems that have been undergoing testing and evaluation by state and military agencies over the past several years. There have been lots of announcements of late regarding various unmanned ground vehicles from Russian government sources, including the possible acquisition of such systems.

But as of yet, there is little concrete evidence as to when such machines might enter into active service.

Following Shoigu’s announcement, however, a clearer acquisition picture is starting to emerge. Moreover, the defense minister was probably referring to ground combat robotics, since the Russian Federation has been manufacturing and using various unmanned aerial systems for a number of years at this point, most prominently in the Syrian conflict, where Russia’s military is now active.

Since then, additional news has trickled out. On March 16, 2018, Maj. Gen. Alexander Mironov, the chief of the Main Directorate of Research Activities of the Russian Ministry of Defense announced that official tests of “Uran-9” combat robot will be completed this year.

The “Uran-9” is a heavy UGV intended for remote reconnaissance and fire support of combined arms, intelligence and anti-terrorist units. The Uran-9s are designed to fight in teams of two, and are armed with a 30-millimeter automatic 2A72 gun, a 7.62-millimeter machine gun, and ATAKA anti-tank guided missiles.

This particular UGV has been showcased at various forums and exhibitions devoted to Russian military achievements, and at least one Middle Eastern state is rumored to be interested in acquiring the technology in the near future.

Other Russian UGVs have been undergoing rigorous testing and trial by fire as well. In March 2018, the mid-size Soratnik unmanned ground combat vehicle underwent testing in cold-weather winter conditions, assisting a team of soldiers with attack and search-and rescue mission. This particular concept of operations hints at the possible use of this UGV in an urban environment, and to a manned-unmanned teaming arrangement that is also currently being honed by the American military.

Another Russian UGV that is potentially ready for acquisition by the military is the mid-size Nerehta. Designed in three varieties — combat, transport and artillery reconnaissance – the Nerehta can be equipped with a 12.7-millimeter or 7.62-millimeter machine gun, as well as a 30-millimeter AG-30M automatic grenade launcher.

According to Russian sources, this UGV performed well at the Alabino testing ground, where the Russian military test its new equipment, and is also used by government and military agencies as a test-bed for teamingunmanned vehicles with artificial intelligence in combat.

Additionally, in its recent Zapad-2017 military exercises, Russia tested the Platforma-M medium unmanned ground vehicle. This particular design is fitted for guard and information collection duties, and sports a 7.62-millimeter machine gun as well as grenade launchers. The Platforma-M is reportedly being considered for border and military base protection duties, a role for which Russian officials have increasingly contemplated using unmanned systems.

Other UGVs – from numerous small-scale vehicles that can perform logistical roles or be fitted with small arms and machine guns, to tank-size machines such as the Vihr – are now going through rigorous evaluation. Once these, and other, systems are inducted into service, the Russian military will need to augment its existing tactics, techniques and procedures to account for the potential benefits and detriments of using unmanned vehicles in ground combat.

Moscow isn’t alone in formulating this next phase of warfare. The United States, as well as other countries, is working on its “road map” for using unmanned technology alongside manned formation. What is particularly interesting about Shoigu’s statement, though, is that he specifically referenced “remote-controlled” vehicles – or machines that require a human operator to guide, direct and fire at the enemy – are a priority for the Russian armed forces.

Thus, while Russia is trying to develop a greater degree of autonomy for its unmanned military systems – potentially powered by artificial intelligence – it seems that true battlefield autonomy for the UGVs is proving elusive. And because it is, Russia’s government is increasingly focusing on systems with a human in the loop.

How will Russia’s combat UGVs perform in battle? It’s currently not clear. Russian systems – like practically all combat UGVs – are vulnerable to enemy fire such a heavy machine guns, rocket-propelled grenades, mines, IEDS or mortars that can target their sensors and cameras or engines and locomotion devices, not to mention the actual armaments themselves, which are not protected to any significant degree.

Russia hasn’t yet announced officially if its combat UGVs will be expendable devices, or if it plans to make them permanent fixtures in operations — something that will require developing fast recovery-and-repair capabilities as well.

Working through such issues will be the real determinant of Russia’s success in using unmanned ground combat vehicles on the battlefield.

Samuel Bendett is a research analyst at CNA Corporation and a Russian studies fellow at the American Foreign Policy Council. The views expressed here are his own.