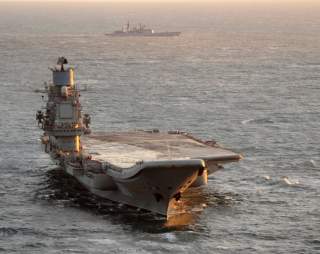 Russia is building a new aircraft carrier its navy chief confirmed on Monday, according to reports in state-owned media outlets.

"The Navy will have an aircraft carrier. The research companies are working on it, and strictly in compliance with the requirements from the Chief Commander," the reported quoted Chirkov as saying. Itar-Tass did not report any additional details except that Chirkov made the remarks while speaking to workers at the Kolomensky Zavod plant. The plant makes diesel electric engines for navy vessels. which makes diesel electric engines.

Russia currently has one operational aircraft carrier, Admiral Kuznetsov, which was launched by the Soviet Union in 1985. However, last month Russian media outlets began reporting that the government-owned Krylov State Research Center was in the rudimentary stages of developing a new carrier-class for the Russian navy.

The reports said that the carrier was still in the conceptual phase of planning. However, when completed the new Russian aircraft carrier would reportedly be able to hold roughly 100 aircraft on board. That would make it 10 percent larger than America’s current Nimitz-class aircraft carrier, which can store roughly 90 aircraft carrier.

The reports last month were greeted with some skepticism abroad. Writing in Reuters, for instance, War is Boring’s David Axe said the new carrier “is likely to remain a paper concept. A quarter-century after the Soviet Union’s collapse, Russia lacks the money, expertise and industrial capacity to build aircraft carriers.” He later added: “But the Kremlin has failed to maintain its expensive shipyard facilities and perishable worker skills. So it can’t actually complete the new vessel any time soon.”

In recent years, Russia has launched a massive program to modernize its military equipment. The program was announced by then-President Dmitry Medvedev in a speech in early 2010. At the time, he said the goal was to revamp “arms and equipment at a rate of 9 to 11 percent per year for the next decade, in order to reach a target of modernizing 70 percent of military equipment by 2020.” That same year Russian officials said the rearmament program would cost around $600 billion.

While many foreign analysts dismissed the announcements as mere bluster at the time, since then Russia has been debuting new weapon systems at an impressive rate. As Nikolas Gvosdev wrote in The National Interest last year, “Russia is now engaged in its largest military buildup since the collapse of the Soviet Union more than two decades ago.” He went on to observe, “The rest of the world is taking notice.”