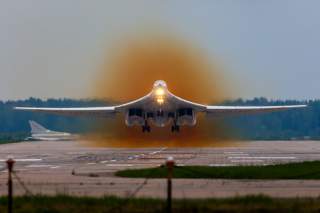 A senior Russian officer claimed the Kremlin’s weaponeers are working on a nuclear-armed, orbital bomber that can lob megaton atomic bombs at any city on Earth just an hour or two after launch.

Yes, you read that right.

But don’t panic. For a whole host of reasons, we’re unlikely to ever see this plane in the real world — nor numerous other high-tech projects Kremlin officials and Russian defense contractors say are in development.

While the country is a major producer and supplier of all sorts of real armaments, Russia may not even really want to build any of these super-weapons.

Since first becoming Russia’s president in 2000, Vladimir Putin has reinvigorated the country’s military and defense industry. But along with the real improvements have come increasingly laughable pronouncements about weapons programs and their progress.

The nuclear space bomber is only the latest.

“Upon command it will ascend into outer space, strike a target with nuclear warheads and then return to its home base,” Lt. Col. Aleksei Solodovnikov, an officer in Russia’s Strategic Missile Forces, reportedly told state-run RIA Novosti. “I think that its lift-off mass must be 20 to 25 metric tons for it to be a strike aircraft. It will [be able to accelerate to] hypersonic speed in rocket mode.”

Oh, and the this flying machine will be able to take off from a normal runway, according to Solodovnikov. We don’t know whether he was talking about a revised concept for the Kremlin’s much-delayed PAK-DA bomber or an entirely new aircraft.

Sputnik, another state-owned media outlet, coupled its article on the space plane with a more than decade-old image by Jozef Gatial, who has produced dozens of pieces of artwork depicting fictitious, cancelled and experimental aircraft as they might have looked in combat.

Gatial’s high-concept art is a good fit, as Solodovnikov described a sort of holy grail of aviation design. Despite decades of attempts by various countries and private companies, space planes remain expensive novelties.

While both could land on a normal airstrip, the American Space Shuttle and its Soviet copy Buran both needed huge booster rockets to propel them into orbit. The U.S. Air Force’s experimental X-37B — whatever it’s supposed to do — rides a re-purposed missile into space. The Pentagon’s cancelled, Cold War Dyna-Soar did the same.

Since 1999, Washington has allotted more than $500 million for the X-37B project. With each Space Shuttle launch costing some $450 million, NASA stopped flying the aged craft altogether five years ago.

Aircraft that can fly from regular airfields to the edge of space are just as difficult to keep in the air. Thanks in no small part to its painfully complicated and gas-guzzling J58 engines, in 1990 Lockheed’s revolutionary SR-71 spy plane cost the Air Force approximately $85,000 an hour to fly. That’s more than $150,000 in 2016 dollars.

Hybrid designs such as Scaled Composites SpaceShipOne and SpaceShipTwo try to get around these problems by using a separate plane to loft the craft into position to blast into outer space. But how “cheap” these aircraft are is relative. With numerous setbacks, including a deadly crash in October 2014, the final bill for SpaceShipTwo could very well equal the cost of the X-37B project.

Even if the Russian nuclear space bomber somehow gets built, Moscow will have to contend with international law. Russia is a signatory to the 1967 Outer Space Treaty, which bars parties from placing nuclear weapons in orbit.

Sure, you can argue that a space bomber only temporarily travels through orbit and doesn’t actually stay there, much like an ICBM does. In any event, world governments surely wouldn’t look fondly upon an atomic space bomber, even if it were technically legal.

Look, for at least the last eight years Russia has been trying to get a prototype of the new PAK-DA bomber off the ground. In January 2016, Russian deputy defense minister Yuri Borisov claimed plane-maker Tupolev might finally have a working design … in 2021.

“We certainly are not going to stop the work on the development of PAK-DA,” Borisov assured reporters four months later.

Earlier in July 2016, an unnamed Indian defense official said that a Russian diplomat had offered his country a nuclear-powered aircraft carrier, according to Defense News. In 2015, Russian sources announced the Krylov State Research Center in St. Petersburg was designing the Project 23000E carrier, also known as Shtorm.

On June 1, 2015, Northern Fleet Commander Adm. Vladimir Korolyov told TASS that the new flattop would have “no analogues in the world” and would cost $5.6 billion. With decades of experience, the U.S. Navy is trying to build its new Ford-class carriers for more than twice that amount.

Though tracing its roots back to the 19th century and the reign of Tsar Alexander III, Krylov has no history of building aircraft carriers. Ukraine’s Black Sea Shipyard built the Kremlin’s only remaining flattop — the often broken and sometimes fatally dangerous Admiral Kuznetsov — more than a quarter-century ago.

Kuznetsov’s conventional steam turbines and boilers are so troublesome that Moscow always sends an ocean-going tug to follow the ship around in case it breaks down. After buying the unfinished sister ship Varyag from Ukraine in 1998, China barely managed to tow the hulk to its new home.

On Nov. 4, 2001, Varyag broke away from its tugs in strong winds and seemed poised to run aground on the Greek island of Euboea. One sailor died as teams tried to get the ship back under control. It took the Chinese navy more than a decade to get the ship ready for service as a training carrier.

India’s experience with the second-hand Admiral Gorshkov, originally built in another Ukrainian shipyard, wasn’t much better. Sevmash Enterprise had little understanding of how to actually do the work it had promised New Dehli it could accomplish. After investing nearly a decade and more than $2 billion, India finally got the newly-rechristened INS Vikramaditya into action.

“If you’re going to make a bet when it comes to aircraft carriers, there’s no question you want to trust the U.S.,” Eric Wertheim, a naval expert and author of the authoritative Combat Fleets of the World, told USNI News. “All India has to look at their own experience of getting their carrier from Russia.”

In speaking to TASS last year, Borisov did not mention when he expected Russian sailors to put the first Shtorm to sea.

In keeping with the atomic theme, Russian-language media reported in 2015 that the new Armata tank — itself possibly overblown — might get a nuclear-tipped shell in the future. “The new-generation rounds will be distinguished by the special power of the explosion,” Gazeta Online declared in May 2015, according to a translation by the U.S. Army’s Foreign Military Studies Office.

“This may not be a tactical nuclear round, but it may be more than a depleted uranium round,” Lester Grau, an Army analyst, noted in a sidebar. American M-1 Abrams tanks can fire those types of projectiles to slice through enemy vehicles.

The armored beast could get a massive 152-millimeter cannon to shoot the round, too. But again, Kremlin weaponeers have been talking about putting gigantic guns on their tanks for more than three decades without ever actually doing so.

From the PAK-FA stealth fighter to space fences to laser tanks and more, the list of dubious projects goes on and on.

If these complicated projects are so obviously unlikely to produce results in the near term, why is Moscow continuing to push these stories? National pride and the cult of patriotism that surrounds Putin and his cohorts are probably the main reasons.

Russia a huge consumer and distributor of weapons, including tanks, fighter jets and missiles. In 2015, Moscow spent more than $90 billion on its military, nearly five times what it had spent in 1998, according to the Stockholm Intentional Peace Research Institute. On top of that, the Kremlin was responsible for 27 percent of all arms exports between 2010 and 2014, only four percent behind the United States.

“The Russian defense budget has grown massively, absolutely massively, over the past few years,” Nick de Larrinaga, an expert on Russian defense issues with IHS Jane’s Defense Weekly, said on the War College podcast in February. However, “the Russians are trying to catch up, but the West is very far in advance.”

Foreign customers and experts still see many of their offerings as dated and crude. Putin and his inner circle seem to be particular sensitive to these claims.

In 2012, firebrand Deputy Prime Minister Dmitry Rogozin complained on Twitter about Russian children playing with military-themed toys that didn’t highlight Russian gear. Kids had “played with Leopards enough,” he wrote, referring to German tanks, after declaring he had ordered toy-makers to fix the problem.

Nearly four years later, Rogozin tweeted out a picture showing a bear lounging on a river bank with an AK assault rifle while a Typhoon-class ballistic missile submarine sailed past. The accompanying message said that Russia only had three allies — its army, its navy and its defense industry.