Russia Built the Largest (and Most Terrifying) Nuclear Submarine Ever 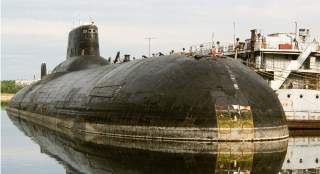