Russia Came Under Attack by a 'Swarm' In Syria, Says Report 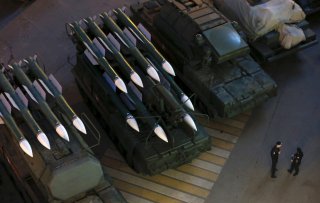 Russian military forces at the Hmeymim air base and the Tartus logistics center in Syria came under attack by what appears to have been a swarm of drones. Some thirteen small unmanned aerial vehicles (UAVs) made the attack, six of which were diverted by Russian electronic warfare systems while seven additional aircraft were dispatched by Pantsir-S1 air defense batteries.

The Russians are asserting that the unmanned aerial vehicles—which appear to have indigenously manufactured—were constructed with the aid of a developed country.

“Engineering solutions used by terrorists when attacking Russian facilities in Syria could have been received only from a country with high technological potential on providing satellite navigation and distant control of firing competently assembled self-made explosive devices in appointed place," the Russian Defense Ministry said.

Analysts dispute the Russian contention, arguing that UAV components are easily accessible and that drones are no longer the sole purview of state actors.

“It’s very likely that such parts were most likely acquired commercially, in which case we are entering a dangerous terra incognita with respect to unsanctioned UAV use by non-state and terrorist organizations,” Samuel Bendett, a researcher specializing in unmanned systems at the Center for Naval Analyses, told The National Interest.

Indeed, the UAVs—which were ‘home-made’—were more capable in many regards than one might expect with ranges as great as 60 miles or more.

“Previous UAV-borne attacks were via small commercial quadrocopters- their accuracy was often questionable but such UAVs used by the terrorist organizations created a powerful psychological effect,” Bendett said. “Now, we seem to have home-made UAVs that flew for tens of kilometers to their target.”

The attack on the Russian forces in Syria—though unsuccessful—is likely the harbinger of more such UAV-borne swarm attacks.

“If the Syrian conflict is a showcase of what is possible with existing and emerging technologies, then such a UAV-borne threat is dead-serious,” Bendett said. “Some expertise is required to outfit such a UAV with navigational technologies, but again, those could be procured on the open market.”

While the Russians seem to believe that the insurgent group that launched the attack had support from an advanced nation-state, there does not seem to be much validity to Moscow’s position.

“So far, there is no validity to those claims,” Bendett said. “The technology and expertise to make such a UAV is fairly widespread at this point.”

The fact of the matter is that drone technology has been democratized and this attack on the Russians in Syria is the harbinger of a future where even insurgent groups will have access to advanced capabilities.