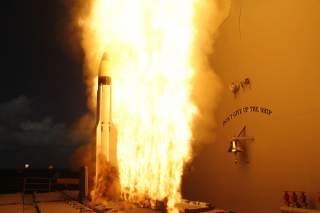 In an earlier article on the USAF X-37B space plane I noted that the Obama administration’s 2010 space policy sought to avoid space weaponization and ASATs. Washington’s current policy reinforces international norms against space warfare and relies on enhanced space resilience, as well as reconstitution of space capabilities.

In stark contrast, Russia and China now are actively developing ground-based, airborne and co-orbital ASATs. In May 2013, China launched a high altitude research rocket that reached Medium Earth Orbit, and demonstrated the means to attack satellites in Geosynchronous Orbit, thus bringing critical US communications and navigation satellites into range. Technologies like electronic warfare and microwave weapons open up the prospect of non-kinetic ASATs which can disable a target satellite by jamming or overloading its electronic systems, without physically destroying it.

It’s clear that current US space policy isn’t preventing space weaponization. Our reliance on space resilience and reconstitution may mitigate some effects of space warfare, but it’s likely the US and its allies would have to fight within a degraded space environment after what’s commonly referred to as a 'Space Pearl Harbor' environment. The effectiveness of mass and firepower over degraded information-dependent forces would see the latter lose the ability to exploit a knowledge edge to employ precision weapons. The playing field would be levelled and, for the US and its allies including Australia, the use of military power would be much more risky.

The 2010 policy states that the US will “develop capabilities, plans and options to deter, defend against, and, if necessary, defeat efforts to interfere with or attack US or allied space systems’ and that it’ll ‘maintain the capabilities to execute the space support, force enhancement, space control and force application missions.” Current US space doctrine breaks Space Control into ‘offensive’ and ‘defensive’ approaches.

Defensive space control seeks to protect US and allied space capabilities, and includes Space Situational Awareness (SSA), as well as dissuasion of an actual attack by reinforcing resilience. Offensive space control includes "negation’ of adversary capabilities, such as active defensive and offensive measures to ‘deceive, disrupt, degrade, deny or destroy" an adversary’s space capabilities. So the policy essentials are already in place for the US to respond to a growing ASAT threat.

Strengthening the offensive space control element of US space policy may not even require ASATs on orbit. The doctrine makes clear that attacking the ground-segment is one option. Jamming the data-links to control satellites and ASATs, together with the full range of defensive space control measures may be sufficient to dissuade an opponent. However if the US begins to look seriously at real ASAT options, these shouldn’t be designed to physically destroy a target. It’s a bad move to create large debris fields in space, and in the process raise the specter of a ‘Kessler’ effect illustrated dramatically (albeit inaccurately) in the 2014 movie Gravity. The potential application of directed energy weapons such as lasers and high powered microwave systems, and space electronic warfare seems a better bet.

In 2008 the US demonstrated a direct-ascent ASAT capability using an SM-3 missile launched from the Aegis cruiser USS Lake Erie, under Operation Burnt Frost. That was to prevent a hazardous re-entry of a failing satellite in a low decaying orbit. However that operation reinforces an interesting dual-use relationship between Ballistic Missile Defense and ASATs, and highlights a likely development path for offensive space control, given that a boost phase intercept of an ASAT-carrying missile is a better option than on-orbit defence. That’s even more relevant today, given the threat posed by a nuclear-armed North Korea. North Korean nuclear ambitions raise the prospect of ‘high altitude nuclear detonation’ (HAND) as the ultimate indiscriminate ASAT. Military and commercial satellites would be vulnerable as such an attack would excite Earth’s Van Allen radiation belts, exposing the satellites to accumulating radiation every orbit until they failed. The global economic consequences of such an attack would be incalculable, but for an unpredictable leader like Kim Jong-un, such a threat could be a powerful coercive tool.

The risk in moving from the current policy stance to a more robust offensive space control posture is that Russia and China will take that as a green light to accelerate and broaden their own ASAT efforts, generating a rapid slide from the controlled militarization of space to the uncontrolled weaponization of space.

Yet the shift seems already underway, and the US has tripled spending on offensive space control, from US$9.5 million in 2013 to US$30.7 million in 2016. The language is shifting too, with Deputy Defense Secretary Robert Work highlighting the importance of ‘Space Control’ in a recent speech. A swing by the US from the ‘strategic restraint’ of the Obama administration, to a robust offensive space control capability would be an important development in the rapidly evolving zone of military space.