Russia and China are Sending Their Navies to the Baltic Sea: Is a Formal Alliance Next? 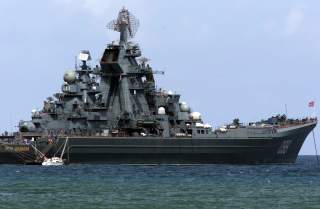 Russia and China are about to kick-off the operational phase of their first ever European joint naval exercises in the Baltic Sea.

The exercise is an indication of the growing strategic partnership between the Kremlin and Beijing. For China’s People’s Liberation Army Navy, the Maritime Cooperation-2017 exercise is an opportunity to demonstrate its global reach and to show its support for a strategic partner. For the Kremlin, the war games are an important demonstration to show that Moscow has friends—if not allies—despite its isolation from the West.

“It is the first time in the history of Russian-Chinese relations that Chinese warships visit Baltiysk.”

China has deployed have deployed three vessels to the Baltic Sea for the exercise, the Type 052D destroyer Hefei, the Type 054A frigate Yuncheng and the Type 903A supply ship Luoma Lake. The Russian Navy is deploying advanced Project 20380 class corvettes—Steregushchy herself and Boiky. The Russians are also deploying Kamov Ka-27 Helix anti-submarine warfare (ASW) helicopters and Sukhoi Su-24 Fencer bombers for the exercise.

The exercises are an indication of a closer partnership between Moscow and Beijing, but falls short of a formal military alliance—analysts in both Russia and the United States said.

“Full alliance means a written commitment to support each other militarily.  We are not likely to have such a treaty in the foreseeable future. But the actual level of defense cooperation and policy coordination is that of an alliance,” Vasily Kashin, a senior fellow at the Center for Comprehensive European and International Studies at Moscow’s Higher School of Economics told The National Interest.

Retired Rear Adm. Mike McDevitt, a senior fellow at the Center for Naval Analyses, told The National Interest that while Beijing and Moscow are getting closer there is not likely to be a new strategic alliance between the two.

“They are getting closer,” McDevitt said. “But, none of the experts I know believe they are headed toward a formal alliance. Neither nation is prepared to go beyond the ‘strategic partnership’ rubric.”

From the Russian point of view, U.S. and Western-led interventions to overthrow various regimes around the world and perceived encroachment upon Moscow’s sphere of influence in the post-Soviet space have driven the Kremlin and Beijing towards greater cooperation. Indeed, China has its own list of grievances with the U.S.-led liberal world order—which some realist scholars also refer to as a liberal hegemony.

“That process is basically the result of the simultaneously growing U.S. tensions with China in the Pacific and with Russia in Europe and the process has been going on for a long time. It sped up during the Obama administration,” Kashin said.

“If there was no U.S. pressure, the two sides would maintain close relations but would avoid getting too close.”

It is unclear how closely the Russians and Chinese will operate during their exercises.

“In both air defense and ASW exercises it is altogether possible that both the Russians and the Chinese are reluctant to go beyond heavily choreographed events out of a combination of safety reasons, avoiding embarrassingly poor performance, or revealing too much operational information to the other side,” McDevitt said.

“Under any circumstances, language difficulties are real-world exercise constraints. Nonetheless, at the publicly observable level, and based upon the statements of public affairs officers these exercises are notable for their increasing size and complexity, their greater realism, and the wider array of operations conducted.”

While the Russian-Chinese exercises definitely have practical military value, leaders in Moscow and Beijing are also sending a geo-political message to the West. The two great powers intend to make naval operations near their shores as costly as possible for the United States and its allies.

“It's a statement game. Seventy-plus years ago Nicholas Spykman wrote that a dominant sea power is only dominant if it commands the ‘marginal seas’ around the perimeter of Eurasia,” James Holmes, professor of strategy at the U.S. Naval War College, told The National Interest.

“The Royal Navy commanded those waters during its age of maritime supremacy, and we've commanded them during ours. In effect the Russo-Chinese entente is putting everyone on notice that it can deny access to the marginal seas, or at least drive the costs of access so high that Western leaders will blanch at paying them.”

Effectively, the message from Moscow and Beijing is that the era of Western—and particularly American—naval dominance is coming to a close. But there are questions as to how durable the partnership is between the two great Eurasian powers. Moscow and Beijing have had troubled relations in previous decades during the Soviet-era where tensions have nearly spilled over into open warfare between the two.

“The message is that the end of the age of Western maritime mastery is at hand. A couple of bonus effects - the PLA Navy gets to show it can operate effectively very far from home, while Moscow and Beijing get to make a show of unity,” Holmes said.

“Many, including myself, doubt how durable a Russo-Chinese entente will be over the long haul. We may be right, but they're showing they could make a lot of trouble in the short haul.”

Olga Oliker, director of the Russia and Eurasia Program at the Center for Strategic and International Studies, agreed that the Sino-Russian naval exercises are designed to send a specific message out. However, Moscow and Beijing are sending different signals.

“I think it’s important to separate out the signals each country is likely trying to send. From Russia’s perspective, there’s of course the usual reminder that this is their neighborhood, where of course they will exercise. Bringing China in sends the signal that they have friends, if not allies,” Oliker said.

“China’s involvement is more interesting. It’s kind of amazing how over a fairly short period China has gone from a country that doesn’t do exercises with other countries, to one deploying into the Baltic Sea. To some extent, this is a show of support for Russia and its right to defend its sovereignty and act in waters near its territory.  I think China is also sending the signal that it, too has territorial waters, and also that it, too, is a global actor. But I wouldn’t read into it that China is thinking it would get involved in any Russian adventures in Europe, though, should those be in the cards.”

The bottom line for the United States is that Russia and China are drawing closer together with the goal of challenging Washington’s global dominance. Historically, the United States has sought to prevent the rise of a regional hegemony or alliance that could dominate the Eurasian landmass. Unfortunately, American foreign policy over the last 25-years might have inadvertently forced two former enemies to cooperate to do just that.