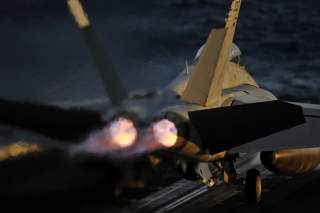 The United States Navy and Marine Corps have come to terms with the fact that America no longer has uncontested mastery of the seas for the first time since the fall of the Soviet Union in 1991. With the rise of near-peer competitors such as Russia and China and the proliferation of long-range precision-guided weapons, control of the sea can no longer be taken for granted.

“The strategic environment is rapidly changing and the Navy and Marine Corps is engaged in a competition that they have not faced in over twenty years,” secretary of the navy Richard Spencer said in his written testimony on April 24 before the Senate Armed Services Committee. “Our PB19 budget continues to make strides in achieving that requirement to once again re-establish the standard that has ensured preeminence. This will be imperative to winning peer-on-peer competition, as we move forward to deliver enhanced distributed lethality.”

Gen. Robert B. Neller, commandant of the Marine Corps, summed up the problem succinctly. “The ascendant threats posed by revisionist powers and rogue states require change – we must become more lethal, resilient and as a consequence, a more capable deterrent. The Navy-Marine Corps team can no longer rely on concepts and capabilities premised on uncontested sea control,” Neller wrote in his testimony before the committee. “We have begun to re-evaluate our capabilities to operate in all domains and conduct sea control, power projection, maritime security, and deterrence knowing that we must consider the tactical and operational details of a contingency – and how our contributions could shape the strategic environment to prevent conflict. Modern sensors and precision weapons with expanding ranges and lethality are redefining how we assess our posture and relative combat power. Advanced defensive networks are forcing us to re-consider the methods of power projection required to compete against rising peers.”

Fundamentally, forward deployed forces, which in previous decades were considered safe, are now vulnerable to attack. “The development and acquisition of long-range precision weapons by our Nation’s chief competitors and threats – China, Russia, North Korea, Iran, and Violent Extremist Organizations (VEO) – have placed many of our forward deployed forces within the effective range of their weapons systems, or ‘threat rings,’” Neller said. “Forward deployed and stationed Marines are now vulnerable to attacks in ways we have not considered for decades. To operate within the Contact and Blunt Layers, Marine forces must be combat-credible and oriented on warfighting to provide credible deterrence.”

The Navy and the Marines will need to rely on dispensing forces and hardening facilities for the new era of warfare. “The Blunt Layer requires a resilient, dispersed basing posture with sufficient forward stockpiles of logistics items and a reliable command and control (C2) network to delay, degrade, and deny aggression,” Neller said. “Conversely, most of our forward bases and stations lack sufficient resilience against long-range kinetic and non-kinetic attacks; thus, jeopardizing our ability to prepare, project, and sustain combat power. Efficiencies in the construction and configuration of these bases made possible by relative security now pose as risks; however, there are remedies to these problems. We need additional hardening of our facilities to include aircraft hangars and command posts, the capability to rapidly repair damage to our air stations, and counter- precision guided munitions and advanced air-defense capabilities.”

Even follow-on forces from the United States will have to fight their way into a theatre—American force cannot count on uncontested transit to the combat zone. “Responding to global contingencies against peer rivals in an expeditious manner may be contested every step of the way – we are going to have to fight to get to the fight. Surge Forces are those war-winning forces that deliver capable mass to the fight, primarily from the Continental United States, but also from across GCCs. They are highly ready and able to fight in all domains, degrading and penetrating anti-access area denial (A2/AD) networks, as well as assuring access and projecting power with C2, fires, maneuver, and logistics.”

Essentially, the Navy and the Marines are moving back to a traditional conventional warfighting footing after more than 25 years of dealing with minor regional conflicts and insurgencies.