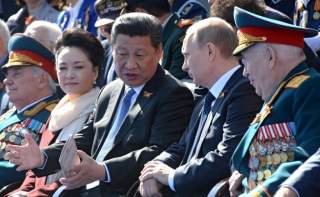 The China-Russia relationship is the world's most important, and the best between any two great powers, Xi Jinping told Vladimir Putin a couple of years ago. Last week, at the Kremlin's V-Day celebration, their ties were reaffirmed in grand style.

Some observers dismiss the partnership as an 'axis of convenience' or a charade of camaraderie. Others point to the widening power disparity between the two, and doubt that Russia will accept subordination to China. Some even think that the two countries are bound for conflict as China thrusts into central Asia, or the two will clash over oil and gas supplies. Chinese nationalists haven't forgotten their lost territories, ceded to imperial Russia under the 'Unequal Treaties.'

So the significance of the rapprochement last week is open for debate. One important dimension of the debate must be the towering role of official media in shaping historical consciousness and in constructing the public worldview. Both great powers run formidable propaganda machines that manufacture well-reasoned but emotional, nationalistic truth.

Gilbert Rozman has explored how Russian and Chinese national 'narratives' interweave in certain ways. Where they overlap, the points of commonality are magnified by each state's media apparatus. For example, while the two nations' experiences of communism differ markedly, Putin and Xi tap deep popular roots of socialist solidarity that allude to the patriotic sacrifice of the Party-worker-soldier-hero fighting imperialism, fascism and hegemony. Both countries share a tradition of messianic leaders who remind their subjects (or 'comrades') of the transcendent wisdom and safety of paternal rule.

Points of historic disputation between the two are delicately ignored. Joint grievances are amplified. It is not hard to discern the targets of rage in their shared historiography. Both Moscow and Beijing strongly resented NATO's intervention in the Balkans, they both opposed America's Iraq misadventure, and both suspect Western 'black hands' in the color revolutions. Japan too is an ancient enemy. Together they strive for a multi-polar world order. The Chinese public enjoys the spectacle of Putin 'standing up to' the West in Ukraine. His popularity is as stratospheric in China as it is in Russia.

Officially, the Russian and Chinese citizenry feel quite warmly towards each other. One-quarter of Chinese already see Russia as their best friend.

The two countries offer each other much in terms of collective and collaborative security. And they are economically complementary. As a Chinese analyst bluntly said at a recent conference, “Russia is resource-rich, we are resource-poor; we are industrializing and Russia is de-industrializing.” Dimitri Trenin sees Putin's rupture with Europe as final, with Russia now committing to a 'greater Asia.'

But this region will become China's 'sphere of influence.' A visitor to Vladivostok today would barely recognize it as Russian territory. Elite relations may be 'warm at the top', but social attitudes are 'cold at the bottom' along the dreary borderland. Despite the undoubted force of their entwined national mythologies, there is not much commercial trust or civic interaction other than the mute, one-way shuffle of Chinese goods across the customs posts. Russians and Chinese elites don't dream of each other; their money and their families have flown to the West.

A Tartar professor's private comment is stark: “Russia has only three things in common with China: a long border, a history of communism, and a shared enemy.” America is the mirror into which both societies look for comparative identity. Russia's self-image is as a nuclear peer, defiant, moral and proud. China's reflection is of a noble empire reclaiming world leadership from a chaotic Washington.

But the official Sino-Russian paradigm allows no cross-examination. For all his quixotic Arctic bomber sorties, Putin surely realizes that although the US may undermine his personal rule, it cannot realistically threaten the integrity of his mighty nation. When he looks at China, the reverse is true. Putin is fighting fires on the Western front, dealing with the urgent, while the important looms distantly on his east. Given the Chinese and Russian power trajectories, any formal future alliance would, as Bismarck put it, have a rider and a horse.

But enough prognostication. The truth is, there is great uncertainty in this relationship, and the reason is simple. Russia is ruled by one man, and China increasingly so. The paradox of stability is that succession episodes in such concentrated political power structures can be very fraught.

“Should we expect another Ukraine if Nazarbayev leaves the post of president?,” Putin ominously asked the Kazakhs last year. He could ask the same of his own demise. Things can change radically when a supreme leader steps down. Under new leaders, narratives can be suddenly altered at will, wordviews shattered. How many, after all, foresaw the Sino-Soviet split in the 1960s, or Nixon's China opening, or the fall of the Berlin Wall? The superpower balance is uneasily fluid, and new powers and southern threats to the China-Russia link may emerge in time.

Xi may be right that the relationship is the world's most fateful, but that is because it is so unpredictable.

This piece was first published in the Lowy Interpreter here.