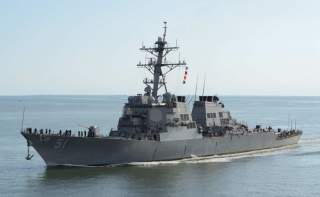 The United States Navy has started work on plans for a new family of warships that will eventually replace the service’s current surface fleet. These new warships will be tailored to address a future global security environment that is expected to be quite different from the one the United States faces today.

“The Navy is working on the requirements for the family of ships that will join the future fleet replacing several combatants to include the first DDG-51 class ships,” said Lt. Kara Yingling, a spokeswoman for the Navy’s Surface Warfare Directorate (N96). “The Navy began a Future Surface Combatant Capabilities Based Assessment (FSC CBA) to identify a holistic common analytic basis for coordinated development of a future combatant shipbuilding strategy. “

While the work is currently in its preliminary stages, the Navy expects to start developing a set of required capabilities for the new vessels starting next year. “Results of the CBA are expected to transition to an Initial Capabilities Document in FY17 that will serve as the basis of follow on Analysis of Alternative studies,” Yingling said. “The intent of the study is the identification of the fleet capability needs that will result from Cruiser, Littoral Ship (LCS) and DDG-51 eventual class retirements.”

Unlike the bulk of the current fleet, which was designed during the Cold War-era to fight the now-defunct Soviet Union, the Navy’s future armada will necessarily have to be tailored for a new era. “The environment will continue to be one where our diplomats seek to achieve balance among nations states vying for resources and violent extremist organizations demanding legitimacy,” Yingling said. “U.S. naval forces and operations will continue to seek to deter aggression and enable peaceful resolution of crises on terms acceptable to the United States and our allies and partners.  If deterrence fails, the Navy will be ready to conduct prompt and sustained combat, incident to operations at sea.”

As such, the new ships must be ready to face-off against emerging threats like a growing and evermore capable Chinese People’s Liberation Army Navy and a resurgent Russian Navy—which is starting to field a new generation of much more capable warships. Because one ship design will not fit all of the service’s requirements, the future surface combatant will likely be a family of warships.

The Navy hasn’t formally decided on the kinds of technology that it will need—but the service expects new types of weapons are likely to be integrated onboard the future warships. “Once capability needs are identified, the Navy will begin developing the non-materiel and materiel approaches to address those needs,” Yingling said. “The kinds of technology are expected to include new and existing weapons, sensors, and communications equipment.  It will also include the integrated operating systems and man-machine interface mechanisms required to maximize warfighting effectiveness.”

One thing that is certain is that the new vessels will require more power-generation capability than exists onboard current ships. Projected future weapons such as lasers and railguns will require enormous amounts of electrical power. Indeed, the Navy wouldn’t rule out integrated nuclear-electric propulsion as an option for the future surface combatant family of warships. “Several options for propulsion and power generation are being considered with an eye toward the growth margin future weapons and sensors may require,” Yingling said.